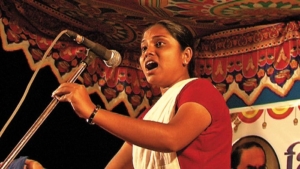 Sheetal Sathe, the founder of the group Kabir Kala Manch, are among the Dalit activists persecuted by the Indian authorities. (Photo from the film ‘Jai Bhim Comrade’)

The Indian authorities use the country’s “vaguely worded, overly broad laws” to silence and harass critics, Human Rights Watch says in a new report released today. Dalit activists and artists are among the victims of such policies.

“India’s abusive laws are the hallmark of a repressive society, not a vibrant democracy,” the organisation’s South Asia director, Meenakshi Ganguly, said as the report was published. “Putting critics in prison or even forcing them to defend themselves in lengthy and expensive court proceedings undermines the government’s efforts to present India as a modern country in the Internet age committed to free speech and the rule of law.”

The report presents several examples of how criminal laws are used to limit the free speech of Dalits. It states that “counterterrorism laws have been used disproportionately against religious minorities and marginalised groups such as Dalits.”

One such case involved Kabir Kala Manch, a cultural group in Maharashtra consisting mainly of young Dalit singers, poets and artists. Between 2011 and 2013, six of the group’s members were arrested under counterterrorism laws. The authorities claimed that they were secret members of a banned Maoist party, but produced no evidence of such membership. The group has consistently denied any links to the so-called Naxalites, but some of its members are still in jail, awaiting trial.

In another case, police in Tamil Nadu state arrested the folk singer S. Kovan in October last year under the sedition law – a remnant from the British colonial era – for publishing two songs that criticised the state government. He was also accused of having links with Naxalites. S. Kovan is a member of an activist cultural group that works with marginalised communities and raises issues of caste discrimination and other human rights abuses. He was later released on bail.

The report acknowledges the SC/ST (Prevention of Atrocities) Act as one of the most important pieces of legislation for the protection of Dalits, but adds that “discrimination against socially marginalised communities such as Scheduled Castes (also known as Dalits, formerly “Untouchables”) and Scheduled Tribes continues.”

It also welcomes efforts to strengthen the law to end caste-based discrimination, but calls some of the recent amendments “problematic from the perspective of freedom of expression”. Therefore, the report recommends that the Indian Parliament amend certain sections of the Act and allow for “restriction of speech only when it constitutes incitement to discrimination, hostility, or violence.”

This is but one of many recommendations included in the report. Two major ones call on India to “develop a clear plan and timetable for the repeal or amendment of laws that criminalise peaceful expression” and to “drop all pending charges and investigations against those who are facing prosecution for the exercise of their right to freedom of expression and assembly.”

As Meenakshi Ganguly puts it: “India’s courts have largely been protective of freedom of expression but as long as you have bad laws on the books, free speech will remain under threat.”