A new report Caste and Development: Tackling Discrimination Based on Work and Descent has just been released by the UK NGO development network BOND highlighting the urgent need to address caste discrimination in order to progress on the UN Sustainable Development Goals.

One of the co-authors of the report, Murali Shanmugavelan writes: 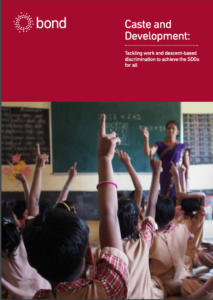 Structural inequalities and discrimination are at the core of the caste system. Caste determines social hierarchy and restricts people’s access to fundamental human rights. It reduces social, political and economic opportunities where the practice is prevalent in South Asian countries and the global diaspora.

Caste affects a fifth of the world’s population by affording social privileges to some and marginalising others. But the Sustainable Development Goals (SDGs) don’t mention it, despite caste-based discrimination being a significant barrier to leaving no one behind.

Caste is a hierarchical category based on pre-set social identities determined at birth and strongly divided by occupations. The most excluded social categories now identify as Dalits (a political category formerly known as “untouchables”). Dalit occupations are most stigmatised, and this stigma often continues even after they find new occupations. Bhim Rao Ambedkar, India’s first law minister, described caste as an “enclosed class” because it prevents social mobility and traps people in poverty and often slavery: “the caste system is not merely a division of labour. It is a division of labourers.”

An example are the “scavenger” Dalit caste groups that are assigned by the caste system to handle human excrement, dead bodies, dead animals, and other sanitation jobs. Anyone born into this group is expected to do this kind of work and struggles to take up other occupations.  Even if they do, the discrimination continues in many aspects of life.

Caste is often thought of as a thing of the past, but it continues to exist in modern societies affecting economies and life-opportunities for individuals and families resulting in inequitable human development.

Inequality and discrimination is central to Agenda 2030

The SDGs “emphasise equality of opportunity and reducing inequality of outcomes, the elimination of discrimination in law, policy and social practice, and socio-economic inclusion of all under the banner goal ‘to leave nobody behind’”. This is not possible in caste-affected countries unless development policymakers and practitioners are sensitive to caste-based disparities and their effects on social, economic and political development.

Agenda 2030 has put discrimination and inequality firmly on the development agenda. This report explores with evidence that there is an inextricable link between inherited caste status and its impact on one’s life opportunity.

Caste affects inequality across the SDGs

In the run-up to this year’s UN High-level Political Forum on Sustainable Development, the report looks at caste-based disparities across several SDG being reviewed:

Discussions and debates are abuzz on the developmental and economic value of data, but there is very little data to monitor progress in addressing caste-based disparities in achievement of specific SDG targets.

In the delivery of the SDGs, data disaggregation by caste status, and more “caste-sensitive” indicators, would help to monitor progress in narrowing resulting inequalities.

Governments should do more to evidence and address experiences of discrimination. International and local agencies that gather data against SDG indicators, such as the ILO and in-country social and economic research centres, could also consider more disaggregation by caste status where appropriate.

In the report, we suggest that governments act on all available evidence to protect the rights of Dalits and other excluded groups, end caste discrimination and remove other caste-specific barriers. We also set out recommendations for donors and NGOs working in caste-affected countries, including that they:

Read Caste and Development: Tackling Discrimination Based on Work and Descent.