UN rights chief warns against “increasing harassment and targeting of” Dalits, Muslims and Adivasis in India

UN High Commissioner for Human Rights, Michele Bachelet, raises concern over increasing marginalisation and discrimination in India, in her speech to the UN Human Rights Council. 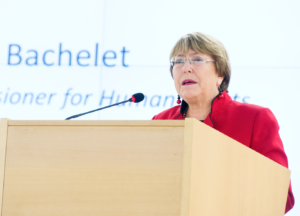 Speaking about the situation in India, the High Commissioner shows concern over the fact that, despite significant poverty reduction in general terms, “increasing harassment and targeting of minorities – in particular Muslims and people from historically disadvantaged and marginalised groups, such as Dalits and Adivasis”. She points out to narrow political agendas in that country lead to further marginalization of vulnerable people.

The statement on India were reported by Reuters.

The speech presenting her yearly report to the Human Rights Council took place on the 6 March 2019, emphasising gross inequalities worldwide. Ms. Bachelet underscored that inequalities affect all countries, regardless of their development stage. For the High Commissioner, “inequalities in income, wealth, access to resources and access to justice constitute fundamental challenges to the principles of equality, dignity and human rights for every human being.

Similarly, the UN Special Rapporteur on the human rights to safe drinking water and sanitation Mr. Léo Heller, in his visit report to India (2017), while recognizing an unprecedented commitment from that country in addressing the enjoyment of the rights to water and sanitation, noted that “fulfilling the pledge to leave no one behind starts with reaching those who are furthest behind”, including the Dalits Dalits (“untouchable communities”) and the Adivasis (ethnic groups in hard-to-reach areas). On that occasion, the Rapporteur explained to the HRC that more that 20% of the Dalit individuals and 50% of the Dalit villages still do not have access to safe drinking water, and that restriction to access to water includes violence against Dalit women or the restrictions of drinking water to Dalit students in the school.