An extensive study on home-based garment workers in India found 99 per cent of workers toiled in conditions of forced labor under Indian law, with over 99 per cent of the workers found to be either Dalits or Muslims. The prevalence of child labour was over 15 per cent and many cases of bonded labour were also documented. 85 per cent of the workers supplied global brands. The report “Tainted Garments: The Exploitation of Women and Girls in India’s Home-based Garment Sector” was conducted by leading labour experts at the University of California. 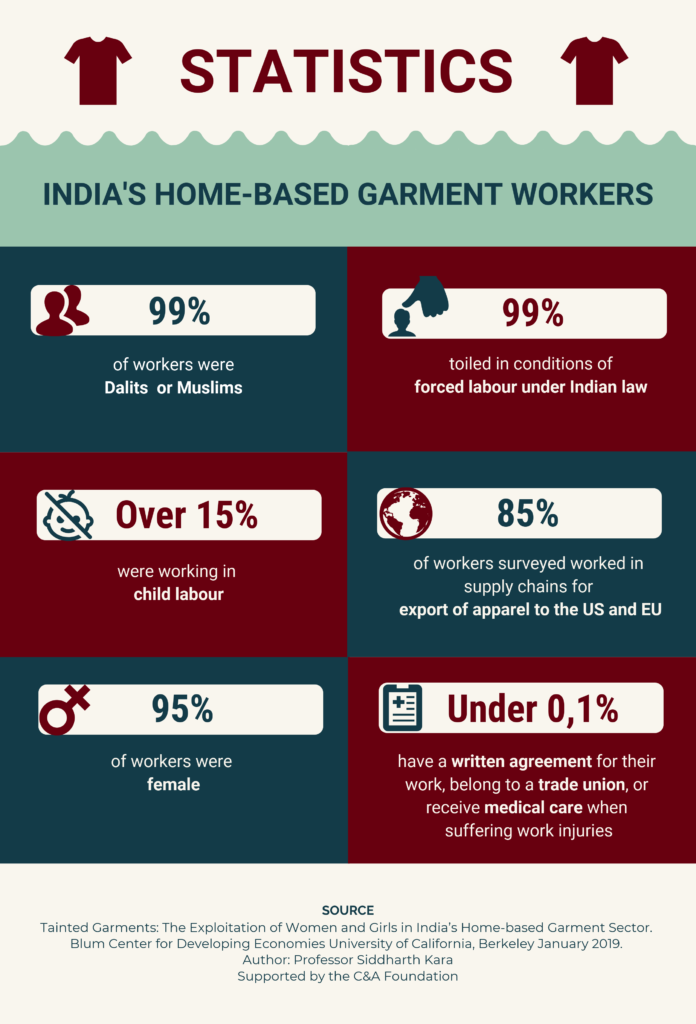 The report offers the most wide-reaching and comprehensive investigation into the conditions of work in India’s home-based garment sector.

“Time and time again studies find that Dalits in the global supply chains are working in forced, bonded and child labour.” says Meena Varma, Executive Director of the International Dalit Solidarity Network. “It is time global businesses start to take serious targeted action to address the discrimination underpinning the systematic and systemic exploitation of labour in India.” 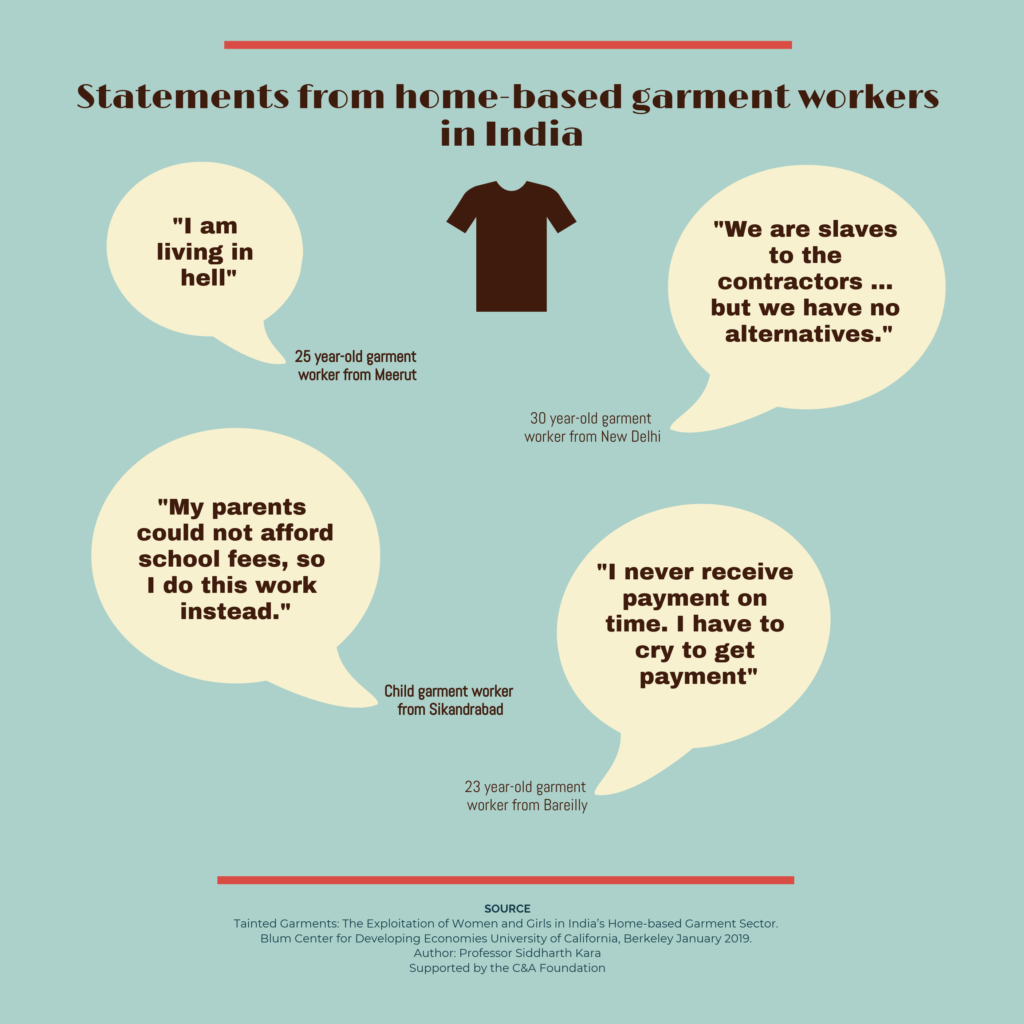 The home-based garment workers in this report typically do the finishing touches on garments such as embroidery, tassel, thread, bead, lace, button and sequin work.

In some of the worst hit areas surveyed the prevalence of child labour was over 30% and wages over 85% below the state stipulated minimum wages.

The full report can be downloaded here >>

Extracts from the Executive Summary of the Report:

This report offers the most-wide reaching and comprehensive investigation yet into the conditions of work for women and girls in India’s home-based garment sector. Women and girls tend to constitute a disproportionate number of home-based work, and the exploitative conditions that come with them, which in turn perpetuates the subordinated and oppressed status of women and girls. Due to the lack of transparency and the informal nature of home-based work, wages are almost always suppressed, conditions can be harsh and hazardous, and the worker has virtually no avenue to seek redress of abusive or unfair conditions. Power imbalances relating to gender further perpetuate the exploitation of female home-based workers, as their liaisons (i.e. labour subcontractors) tend to be male and can often be verbally abusive or intimidating in order to secure compliance. Conditions are worsened by the fact that there is little to no regulation or enforcement from the state regarding conditions for home-based workers in India. The primary aim of this report is to provide insights into the lives of India’s home-based garment workers in the hopes that governments, industry, and non-profits will be better able to coordinate on solutions to address the exploitative conditions documented.

Approximately 85% of the home-based garment workers documented for this report exclusively worked in supply chains for the export of apparel products to major brands in the United States and European Union, and the remaining 15% worked in a mix of export and domestic production. The home-based work performed by these individuals typically involves the “finishing touches” on a garment, such as embroidery, tasseling, fringing, beadwork, and buttons. The Summary Findings of the research are included in Table 1 below. At first instance, it must be noted that there are several stark differences between the conditions faced by home-based garment workers in northern India versus southern India. Indeed, one could argue that there are in some ways two different home-based garment sectors in India — northern and southern.

The three most important findings of this research are: 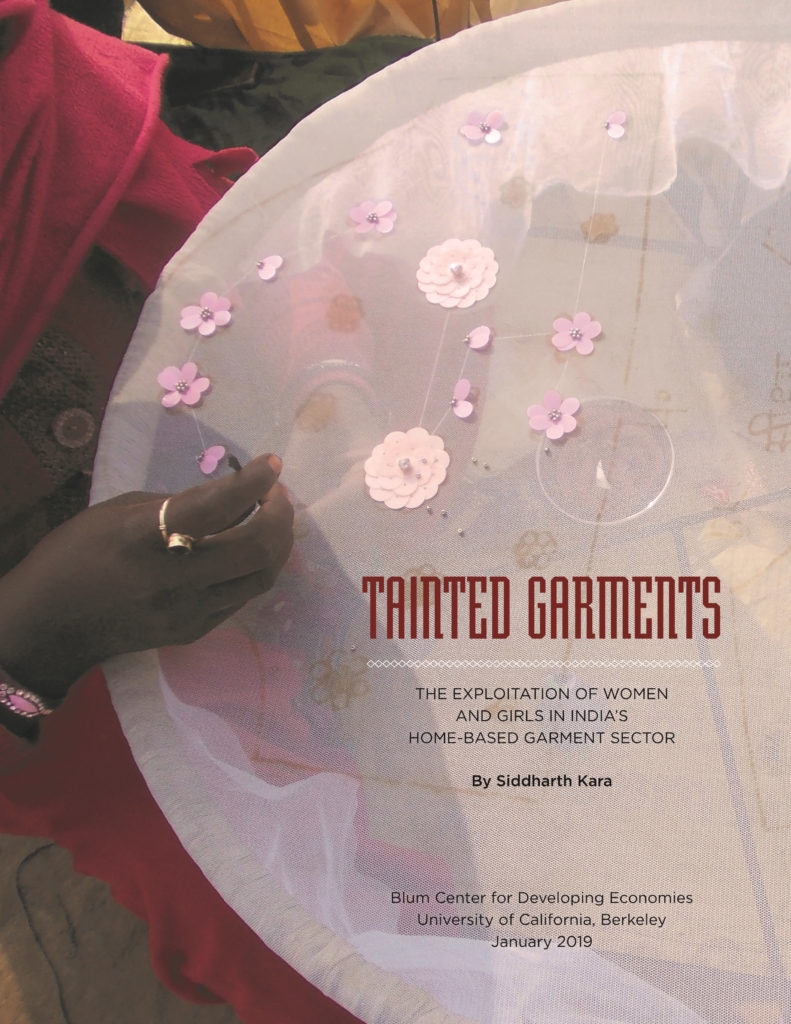