Americans Declare Empathy with Dalits at US Congress event

Descendants of prominent African American families, who led the civil rights movement, presented a Declaration of Empathy to the US congress. The declaration appeals to all Americans to stand in solidarity with the Dalits of South Asia to fight caste discrimination and caste-based slavery. 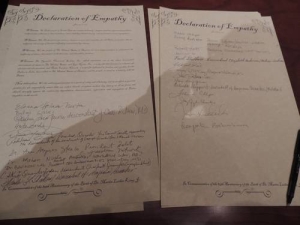 The Quander Family joined together with descendants of Frederick Douglass, Booker T. Washington, Thomas Jefferson, Solomon Northrup, Malcolm X, and many others stating that:

“African Americans and fellow Americans should oppose the modern-day enslavement of the dalits (of india), and declare empathy with their plight.”

The group signed the declaration at the US Congress in Washington DC on Martin Luther King’s birthday. The event was organised by the US Dalit Freedom Network, the Quander Family and U.S. Congresswoman Eleanor Holmes Norton. Judge Rohulamin Quander, the main architect behind the Declaration, stated that:

“The Quander family, like other African American families, still feels the pain and sting that institutional discrimination visited upon us. With this Declaration of Empathy, we stand in solidarity with the oppressed Dalit people of India. Until they are free, none of us is, indeed, free.”

The group behind the declaration are calling it a historical landmark. An ambitious online “Declaration of Empathy” petition, aimed at US citizens, has now been launched with the goal of gaining more that 1 million signatures.

In 2007, the U.S. Congress passed House Concurrent Resolution 139, “expressing the sense of the Congress that the United States should address the ongoing problem of untouchability in India.” When visiting India

in 2010 President Obama also stated that, “No matter who you are or where you come from… every person deserves the same chance to live in security and dignity.” With the Declaration of Empathy, US citizens are encouraging their country and their elected officials to do more to help end untouchability and caste discrimination globally.