Dalit and Adivasi activists protested in front of the Indian Parliament Tuesday, to convey their anger that India’s ruling parties have broken their promise to table important budget bills, meant to benefit Dalits and Adivasis (SCP TSP Legislation) and amendments to the act meant to prevent atrocities against Dalits and Adivasis (the SC/ST PoA act). 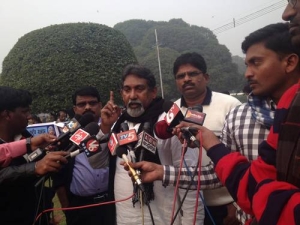 Protesters chanted, “Enough is enough, don’t betray us, we will no longer remain silent,” and made speeches on the importance of the bills.

“We demand that the amendments to the SC ST POA Act should be passed immediately to ensure that justice prevails and restore the people’s faith in the present government,” said Ramesh Nathan, Convenor of the National Coalition on strengthening of SC ST POA Act.

In connection with the recent campaign to reclaim the Dalit and Adivasi share of the budget (Sau Mein Pachees Haq Hamara), a Dalit delegation led by Paul Divakar, Convenor of the National Coalition on SCP TSP (NACSTL), met several high level ministers and party leaders, including the Minister for Social Justice and Empowerment and Vice President of the Congress Party Shri Rahul Gandhi. They promised that the bills and amendments would be taken into the parliamentary session last week but to the dismay of the protesters, these promises were not kept.

Dalit activists are fed up with being offered broken promises in place of pivotal changes needed in legislation in order to advance the status of Dalits and Adivasis in India. Dalit and Adivasi women are also insisting that existing legislation will not bridge severe development gaps unless it includes special allocations, provisions for stringent monitoring mechanisms and adequate representation in the planning and implementation of the schemes with a stronger gender perspective.

Paul Divakar said, “we need to challenge the willful negligence of the present government in implementing SCP TSP. We would like to see the government fulfilling their promises to the community. We demand to legislate SCP & TSP and we will fight tooth and nail for our economic justice and will not remain silent.”

Beena Pallical, of the National Coalition on SCP TSP Legislation also comments that Dalits and Adivasis refuse to be used as vote banks in the upcoming Indian elections and will not lend their votes to parties who fail to live up to their promises and commitments on key Dalits and Adivasi issues.

Fifteen activists were arrested for protesting peacefully in front of the parliament and were kept in detention the rest of the day before being released.

The campaigners are urging all who care about justice for Dalits and Adivasis in India to fax a letter to the Prime Minister and to Shri Rahul Ghandi, demanding the immediate passing of the Special Component Plan and Tribal Sub Plan and Legislation & Amendments in SC ST Prevention of Atrocities Act.

Download the letter to fax to the Prime Minister of India

IDSN News on the Campaign

Status of the SCP TSP and the Draft SCP TSP legislation

Interview with Asha Kowtal on Special Legislation in India