UN agencies in India team up to fight caste discrimination

Convened by the United Nations Development Programme, six UN agencies including IFAD, ILO, UNFPA, UNICEF and UN Women are working together to help accelerate inclusion of Dalit and Adivasi issues and access to rights in national and state policy and planning processes. 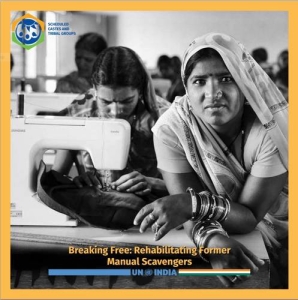 The team has been formed in recognition of the key role fighting exclusion and marginalisation of Dalits and Adivasis plays in reaching development goals and access to key rights for a large proportion of the population in India. They write on the www.in.one.un.org website, “Targeting interventions to the most disadvantaged improves lives and addresses multi-dimensional poverty,” and “The United Nations in India is committed to support the Government of India’s efforts towards greater inclusion of the Scheduled Castes and Scheduled Tribes in the development process.”

Among other initiatives, the team has launched a campaign to end manual scavenging including the production of a briefing leaflet on manual scavenging entitled Breaking Free: Rehabilitating Manual Scavengers  and photo essays and videos to create awareness and engagement.

Illustrative of this effort is also the recent ‘National Consultation on Rehabilitation of Manual Scavenger’s and Role of the Government, UN agencies, Public and Private Sector, CSR and Civil Societies’ consultation held in New Delhi. The many UN agencies present voiced a strong commitment to working jointly and with civil society, Government and the corporate sector to ensure proper rehabilitation of manual scavengers.

The photo essays include:

Breaking Free: Women Champions End Manual Scavenging Despite legislation that prohibits manual scavenging, it is estimated that a significant proportion of the country’s 2.6 million dry latrines are cleaned manually. Women comprise the vast majority of manual scavengers. Community advocates are playing an important role in ending the practice.

Breaking Free: From Manual Scavenging to Fish Farming Manual scavenging refers to the practice of manually cleaning, carrying, disposing or handling in any manner, human excreta from dry latrines and sewers. Since 1993, key legislations have been enacted prohibiting employment of people as manual scavengers, banning the construction of dry latrines and providing rehabilitation.  Yet, a significant proportion of an estimated 2.6 million dry latrines in India continue to be cleaned manually.

Breaking Free: Life After Manual Scavenging “I used to throw up all the time because I could not take the smell,” says Sevanti Bai, recalling the many decades she worked as a manual scavenger in Dewas district in Madhya Pradesh. Convinced by others in her community and the law which prohibits manual scavenging, she quit in 2007. Since then, she and her family have struggled, making ends meet, through odd jobs, working in the fields and cleaning grains.