There was a strong will from multiple stakeholders to help rehabilitate former manual scavengers at the ‘National Consultation on Rehabilitation of Manual Scavenger’s and Role of the Government, UN agencies, Public and Private Sector, CSR and Civil Societies’ consultation held in New Delhi. 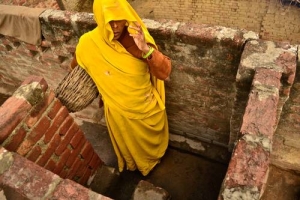 Participants reviewed the existing rehabilitation policies and provisions and analyzed the many obstacles to implementation of the legislative measures for rehabilitation and the challenges social stigma presents for manual scavengers trying to forge alternative livelihoods such as selling goods. Analysis of these obstacles resulted in the emergence of three clear central goals.

The first goal was to initiate a national level platform bringing together stakeholders from the Government, UN, private sector, and civil society organizations to develop and implement collaborative approaches to end manual scavenging and support livelihoods with dignity for people who leave this practice.

“UN WOMEN in India is committed to end caste based inhuman practice of manual scavenging where mostly Dalit’s are forcefully employed and importantly more than 90% are women. We are all gathered here, we have to work towards ending this practice and for that we need stand together.” Said Dr. Rebecca Reichmann Tavares, Representative of UN Women India.

The second goal agreed upon was to ensure that economic empowerment and rehabilitation initiatives support decent livelihood opportunities, free from stigma and discrimination, and break cycles of caste-designated labour by securing education and scholarship opportunities.

“Communities who have traditionally worked as “manual scavengers,” face significant barriers to entering the labour market, including social boycotts in retaliation for refusing to clean toilets in the village, gender- and caste-based discrimination to accessing employment, and corruption, such as being asking to pay bribes in order to be appointed to reserved government positions. For many, these obstacles are exacerbated by low education levels and an absence of marketable skills,” said Coen Kompier, Senior Specialist from the ILO.

The third goal highlighted by the group was to expand access to livelihoods with dignity by expanding existing training and employment opportunities, and piloting new initiatives through collaboration between government, UN, private sector, and civil society organizations.

This focus on skill development was widely recurrent and particularly emphasized by private sector participants such as Mr. Milind Kamble, Founder of Dalit Indian Chambers Of Commerce and Industries (DICCI) and Ms. Bhawna Katariya, Confederation of Indian Industries (CII).

In the consultation report key strategies for comprehensive rehabilitation are outlined and proposed action is summarized in support of the agreed goals.

Read the full report from ‘National Consultation on Rehabilitation of Manual Scavenger’s and Role of the Government, UN agencies, Public and Private Sector, CSR and Civil Societies’

The UN India cross agency team has also launched a campaign to end manual scavenging including the production of a briefing leaflet on manual scavenging entitled Breaking Free: Rehabilitating Manual Scavengers  and photo essays and videos to create awareness and engagement.

A landmark judgement in the fight to eradicate manual scavenging