October was a month of headlines on India’s Prime Minister, Narendra Modi, asking the nation to rise above caste divides and telling every Indian to pick up a broom and sweep the streets. Modi’s drive to make India clean and to end the practice that one caste group is tasked with cleaning up after all the others, sounds promising. It remains to be seen, however, whether there will be true reform and political will to end caste discrimination, behind the hype. 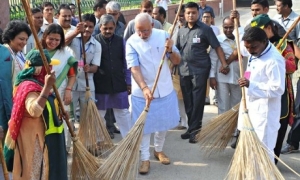 Photos of the prime minister cleaning a Dalit neighbourhood in New Delhi were posted widely on international and national media on the 2nd of October, when he jolted the nation by picking up a broom and asking all his officials and ministers to join in the effort to clean up India. The stunt, timed for the birth anniversary of Gandhi, kicked off Modi’s Clean India campaign – vowing to clean up India and improve sanitation by 2019. Many have applauded the effort while others remain sceptical of whether the Government will allocate the necessary resources and change policies and practices to truly achieve this mission.

Please find a few press clippings on the campaign below:

Need to clean our biases first, then our streets (Hindustan Times) “Cleaning India requires dismantling the deadweight of India’s inequalities, and of our tolerance of social humiliation and the governmental neglect of women, people of disadvantaged castes and religions, and of working people in slums. Until that happens, we would evoke Gandhi’s name in vain by depoliticising one of India’s most deeply political problems, perpetuated by powerlessness and neglect of India’s millions of lesser lives.” Harsh Mander,  Director, Centre for Equity Studies.

Modi aims to shake up sanitation with Clean India drive (Reuters)“Modi will have to deal with society’s failure to liberate the Dalits (low caste people) from the demeaning profession if he wants India to be as clean as Singapore,” said Pravin Panchal, a researcher at the Environmental Sanitation Institute think-tank.

Clean India Mission: Beneath the hype (Frontline) “The Prime Minister launches the Swachh Bharat Abhiyaan, or Clean India Mission, with much fanfare but there is little evidence that the government is really addressing the many factors behind the lack of toilets and cleanliness in the country.” T.K. Rajalakshmi

Modi launches Indian clean-up drive by telling officials: get sweeping (The Guardian) “In a country like India where there is caste and class discrimination, he has given a sign that everyone should be involved and this is a radical departure,” said Dr Bindeshwar Pathak, a pioneering campaigner on sanitation. “We have never before seen politicians and bureaucrats sweeping the streets.”