Caste discrimination is a key factor behind child labour in India, home to the highest number of child labourers in the world. This is the message coming from experts on child labour. The Nobel Peace Prize winner, Kailash Satyarthi, also explains how witnessing caste discrimination as a child spurred on his engagement with fighting for the rights of the most marginalised. 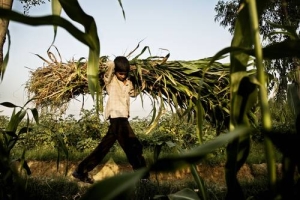 Child labour and casteunfortunately continue to go hand in hand in India. In connection with the Nobel Peace Prize being awarded to one of India’s chief campaigners against child labour, Mr. Kailash Satyarthi, this issue has again been raised in global media and in expert statements.

IDSN network members have been working for years on combatting caste-based child labour including the forms of caste-based child prostitution, Dalit children working in agriculture, manual scavenging and mining, garment, carpet weaving and construction industries. However, as long as ingrained discrimination and stigma continue to be the cause of extreme poverty and lack of opportunities for Dalit families, finding alternative  routes for Dalit children to engage in such as education is proving difficult to sustain.

In the article ‘Poverty and caste fueling child labour in South Asia’, in connection with Mr. Satyarthi’s Nobel peace prize win, Harvard child labour expert, Siddharth Kara, comments that caste is a key factor underlying child labour in India. He says that, “Every single child labourer that I have documented comes from a highly impoverished family unit and belongs to a low-caste or minority community.”

In her statement, Stopping the small hands of slavery, Human Rights Watch South Asia Director, Meenakshi Ganguly, also points out that caste discrimination is partly to blame for child labour in India, as discrimination pushes many Dalit children to drop out of education.

Satyarthi himself reveals that witnessing caste discrimination as a child and teenager in India were what fuelled his engagement with fighting for the rights of those who are abused and marginalised. In a New York Times article he recounts how he as a child experienced that a Dalit child did not go to school and was told that this child’s caste determined that he would work as a cobbler.

Satyarthi also explains that he, as a teenager, arranged a dinner cooked by Dalits for members of dominant castes. He was infuriated when the dominant castes boycotted the dinner and subsequently shunned Satyarthi’s family. This incident in fact caused him to change his then dominant caste surname to his present Satyarthi, meaning “seeker of truth”.

In his work on child labour Stayarthi has inevitably continued to champion the rights of Dalit children, as do the many activists and organisations in South Asia working on the nexus of caste discrimination and child labour. But a concerted and coordinated effort from all actors International, national, government, multilateral, industry and civil society must be made in order to curb caste-based child labour in India and elsewhere.