Following yesterday’s vote in the House of Commons against outlawing caste discrimination, campaigners – including the Dalit Solidarity Network UK – have vowed to continue their struggle to make this form of discrimination illegal. 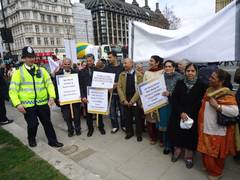 As up to a thousand people demonstrated in Londons’ Parliament Square yesterday, a majority of MPs in the House of Commons voted against an amendment to a bill that would include caste discrimination in the country’s Equality Act.

The outcome of the vote ensured that it still not illegal in the UK to discriminate others on the basis of caste, despite strong evidence that this is a serious problem within immigrant communities from South Asia. It is estimated that hundreds of thousands of Dalits live in the UK, making them potential targets of caste discrimination.

“I am very disappointed. But we’ll keep going until we get this legislation,” Meena Varma, Director of the Dalit Solidarity Network UK (DSN-UK), said in a comment to the vote which saw 307 MPs oppose a legal ban with 243 in favour.

The majority backed the British government’s decision to counter caste discrimination through a community education programme rather than legislation, despite government-commissioned research suggesting that this approach is inadequate. On 4 March, the House of Lords had gone against the government position and supported a legal ban.

During yesterday’s debate, Equalities Minister Jo Swinson said that the government was working with Hindu and Sikh communites to “address these problems”. But Conservative MP Richard Fuller made the following statement in opposition to his own party’s position:

“This is a straightforward issue, caste discrimination in the work place is wrong and the people who suffer from it deserve legal protection. That’s it. Beginning and end.”

Caste discrimination in the UK must be outlawed (Guardian: Comment is Free)

IDSN briefing paper on caste discrimination in the UK

Information on the UK in IDSN’s database