Participants in a consultation on Dalit political representation have adopted a resolution urging political parties in Pakistan to nominate members of ‘scheduled castes’ for seats in the country’s elected assemblies. 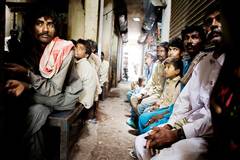 The segregation of Dalits is complete in this Karachi tea shop. They are simply not allowed into tea shops owned by Muslims or dominant castes. Photo: Jakob Carlsen/IDSN

Political parties in Pakistan should include Dalits in their lists of candidates for the upcoming elections to ensure that they are represented in national and provincial assemblies. Otherwise, they will miss out on the Dalit vote, a meeting in Hyderabad of Dalit groups and political and social activists concluded last week.

Zulfiqar Shah, general secretary of the Pakistan Dalit Solidarity Network (PDSN), noted that there are several million Dalits in Pakistan. They have a sizeable vote in a number of constituencies, particularly those in the lower part of Sindh province. Mr Shah stressed that the Dalit vote can be decisive and needs to be used wisely.

According to Gianchand, a former legislator, the districts of Umerkot, Mirpurkhas and Tharparkar in Sindh have around 50 percent Dalit voters. However, political parties do not recognise their status, and they are not properly represented in elected assemblies.

Participants in the consultation described it as ‘ironic’ that the last National Assembly only had one Dalit member, while the Upper House as well as provincial assemblies had none at all. They also agreed that discrimination against Dalits by the political parties is not only against the spirit of equality, but also a violation of international conventions that Pakistan has ratified.

Dalits are among the most marginalised and impoverished people in Pakistan, and their situation is deteriorating. Last year, prior to the examination of the country’s human rights record by the UN’s Universal Periodic Review mechanism, PDSN and IDSN submitted a joint report which documented widespread discrimination, segregation, and physical attacks against Pakistan’s Dalit population.

During the review itself, two states made specific recommendations on the situation of scheduled castes in Pakistan.