Thousands of Dalit activists gathered in Delhi over the weekend to campaign for land rights. They hope to mobilise millions of India’s Dalits to file claims for land. 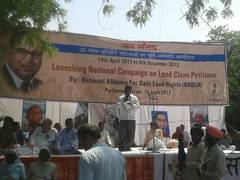 The campaign was launched on 14 April.

The recently formed National Alliance on Dalit Land Rights (NADLR) has joined forces with Ekta Parishad – an organisation working for land rights – to launch an ambitious campaign that aims to make as many as 2.5 million landless Dalits file land claims before the end of this year.

During the past weekend, NADLR and Ekta Parishad activists gathered in Delhi to place the issue of land rights more firmly on the political agenda. On 13 April, they organised a so-called ‘Peoples’ Parliament’ where a number of speakers discussed the land issue which is of crucial importance to millions of landless Indians, many of whom are Dalits and tribal Adivasis.

Ekta Parishad leader P. V Rajagopal reiterated the organisation’s slogan “First land, then vote – no land, no vote”, referring to upcoming elections where political parties will face pressure to act on the issue of land rights.

The following day, NADLR activists in their thousands marched in the vicinity of the Indian Parliament to declare the launch of the new claim petition campaign, aiming to mobilise Dalits – particularly women – in 250 of the country’s 680 districts to submit petitions to claim their land rights. As many of 80 per cent of rural Dalit households are landless.

“Our demands include equitable distribution of land, reclamation of land earmarked for Dalits but under the illegal occupation of non-Dalits, and freeing of land from Non-Resident Indians and corporations who do not use arable land for agriculture,” Vincent Manoharan, chairperson of the National Federation of Dalit Land Rights Movements, one of the main constituents of NADLR, said prior to the weekend’s events.

NADLR brings together hundreds of Dalit groups and was formed earlier this year. Ekta Parishad has campaigned with some success for land reforms in India, securing a promise from the government in 2012 to introduce such reforms. NADLR and Ekta Parishad recently decided to form a united front in their fight for the country’s landless poor.

The launch of the campaign coincided with the 122nd birthday of the revered Dalit political leader Dr. B.R. Ambedkar. This day is widely celebrated by India’s Dalit communities. The end of the campaign is scheduled for 6 December, the 57th anniversary of his death. The campaign will then hand over copies of the 2.5 million petitions to the President of India, requesting accountability from the government on the land rights issue.