Dalit and Adivasi Civil Society Organisations, Human Rights Defenders from across India met in New Delhi to discuss the status of implementation of India’s legislation to prevent atrocities against Dalits and Adivasis. There was widespread dissatisfaction among participants that key elements of the legislation were not being implemented, and a call was made asking for action to be taken by the authorities in charge. 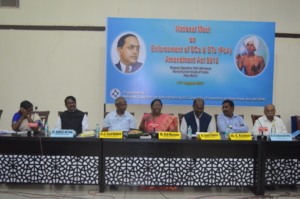 Dalit and Adivasi Civil Society Organisations, Human Rights Defenders celebrated when the Indian Government passed key amendments to its Scheduled Caste and Scheduled Tribes prevention of atrocities act (SC/ST PoA Act) in 2016. The amendments enshrined into legislation that India must set up Exclusive Special Courts to facilitate speedy trials, provide compensation to victims and many other key initiatives to curb violence and discrimination against India’s Dalit and Adivasi communities.

However, when the National Coalition for strengthening the SCs & STs (Prevention of Atrocities) Act met in New Delhi in August, to review the action taken by the government to implement the act, the reports coming from across India found that the act was very far from being adequately implemented.

Participants noted that Dalit and Adivasi communities continued to face inhumane atrocities due to their descent including murder, social and economic boycotts, rape, torture, and other forms of violence. Despite this the Exclusive Special Courts, mandated in the amendment act, have not been set up in states. Offences are not registered under the correct sections of the amended act, compensation is not provided as per the amended rules and many other amended provisions are failing in many ways.

In order to hold Government and officials accountable to the legislation the Coalition has made the following call to the enforcement authorities:

“[Enforcement authorities must] Robustly, enforce and implement the new provisions of the amended SCs and STs (PoA) Act 1989. Take swift and robust action against the dominant caste perpetrators violating the human rights of Dalits and Adivasis. Conduct an open and transparent investigation under the Scheduled Castes and the Scheduled Tribes (Prevention of Atrocities) Amendment Act, 2015 and prosecute those Government and police officials who are found to have aided and abetted criminals. Robustly, implement the establishment of Exclusive Special Courts mandated in the amended act for speedy trials.”

In addition to this call participants at the meeting suggested key follow up action including:

Read the briefing note issued by the coalition here