Following the devastating floods in South Asia serious concern for Dalit communities affected by the disaster is being reported. IDSN’s members are on the ground responding and monitoring the situation as it unfolds.

Nepal, Bangladesh and India have experienced severe flooding over the past weeks and many Dalit communities are hard hit. In this article we will share some of the reports we have received from members in Nepal. We will be following up on this once more reports have come in from the rest of the region.

While monsoon flooding in Nepal is not unusual the amount of water and the large area it is covering has not been experienced for over 20 years. According to news outlets the flooding is especially affecting Nepal’s poorest, such as those in Bairawa village in Saptari District, whose residents are mostly Dalits.

The Feminist Dalit Organisation (FEDO) reports that they are collecting and distributing relief materials to the flood victims and have provided some cash to their district chapter so as to buy goods for the victims of Siraha, Saptari, Rautahat, Bardiya, Udaypur and Mahottari. They have also provided warm clothes, medicine and dry food – and are trying to collect as much as they can to distribute to victims.

The Dalit Human Rights Portal, operated by the Jagaran Media Center JMC) and implemented through a consortium of five organizations NNDSWO, SAMATA Foundation, RDN Nepal, JMC, and MDDF also highlighted the following case of Dalits in desperate need of relief:

Case: No end in sight to plight of Saptari flood victims

Exerpt from case from the Dalit Human Rights Portal 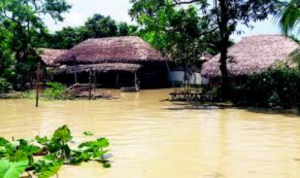 Children in Dalit settlements of Bishnupur Rural Municipality in Saptari are in dire need of relief materials, as they have lost their houses along with clothes and food grains in the floods.

The children, along with their parents, have been taking shelter in makeshift tents on the roadside … Flood victims said children in Dalit settlements had no food to eat and no clothes to wear. They complained that the government had paid no attention to their plight. Puran Sada, another victim, said the flood victims were in desperate need of government relief and rehabilitation.

As many as 40 homeless families from Dalit settlements have been taking refuge at a local school and community buildings. Some of them are living under the open sky. Reports said a total of 3,990 families had been displaced due to floods in local rivers in the district… In Saptari district alone more than 1,500 houses have been submerged in water and 350 families have been displaced. As the land and houses submerged people have gathered at sections of many roads… Read the full case story here.

IDSN members in Nepal are working very hard under difficult circumstances and we will follow up on this news once we have more information also from members in Bangladesh and India. FEDO posted the following picture of their offices on Facebook.