The house resolution introduced on the 16th of March by Congresswoman Eleanor Holmes Norton condemns caste-based discrimination ad asks for the international community to act on this. The 1st Global Conference on Dalit Rights, which took place in Washington DC from 19-21st of March honoured the Congresswoman for introducing the resolution and urged congress to show strong support for it. 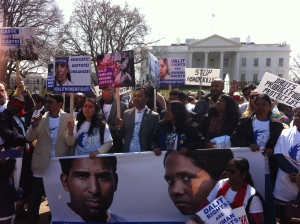 The resolution, H.Res.158, was introduced into the U.S. House of Representatives, “Condemning Dalit untouchability, the practice of birth-descent discrimination against Dalit people, which is widely practiced in India, Nepal, the Asian diaspora, and other South Asian nations, and calling on these countries to recognise the human rights of the Dalit people and end all forms of untouchability within their borders.”

The resolution also demands that,

“The international community put pressure on the governments of nations that still practice Dalit untouchability to take every necessary measure to end this horrific practice and to protect the fundamental rights of all Dalits within their borders.”

Congresswoman Norton participated in opening ceremony of the Global Conference on Defending Dalit Rights and was applauded by attendees who came from countries including India, Nepal, Sri Lanka, the United Kingdom, Canada, Sweden, Denmark, Holland, France, and dozens of states in the U.S. IDSN Executive Director, Rikke Nöhrlind also participated and addressed the conference.

The conference was organised by US-based Dalit rights organisation the International Commission on Dalit Rights (ICDR) in coalition with US activists including US Dalits and addressed themes including, international human rights mechanisms, violence, and inequality, gender equality and the power of Dalit women, legislative approaches to ending caste-based discrimination and a universal measurement and advocacy framework named the caste freedom index. Conference participants also demonstrated in front of the White House urging the US Government to stand in solidarity with the struggle to end caste discrimination.

The conference also addressed obstacles and the shrinking space for Dalit human rights defenders including mention of the blocking by India of IDSN’s UN consultative status for over 7 years. On 23 March, IDSN together with 14 other international and regional NGOs sent an open letter to US Secretary of State John Kerry urging the US to show leadership in supporting IDSN’s application in the NGO committee.

Read the full text of the resolution

Learn more about the 1st Global Conference on Dalit Rights