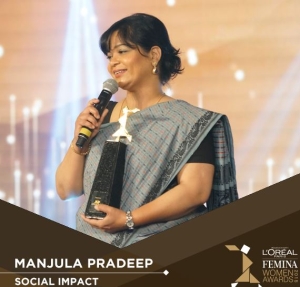 In April two Dalit women received prestigious awards for their work on defending the rights of Dalits in India. Manjula Pradeep, Director of the large Gujarat based NGO Navsarjan Trust, received the Femina Women 2015 Social Impact Award and Beena J. Pallical of the National Campaign on Dalit Human Rights received the Dr. Ambedkar Award 2015 for her work.

These women are a part of a growing number of Dalit women in India standing up for the rights of Dalits and fighting oppression with courage and unwavering determination.

An interview with Manjula Pradeep was published in 2014 – giving powerful insight into her work and the Times of India have also made a video profile of her in action.

Beena J. Pallical has been working for many years with the National Campaign on Human Rights and has delivered a powerful contribution to the work against caste discrimination and for the rights of Dalits in India. She gave a moving speech expressing her gratitude to those who she works alongside and to Ambedkar himself.