A new report has been released by NGO Rashtriya Garima Abhiyan looking at the caste inequities underpinning manual scavenging in India and the many Dalits dying while cleaning septic tanks and sewers with no proper equipment. The findings, outlined below, point to an urgent need for action to end this practice. 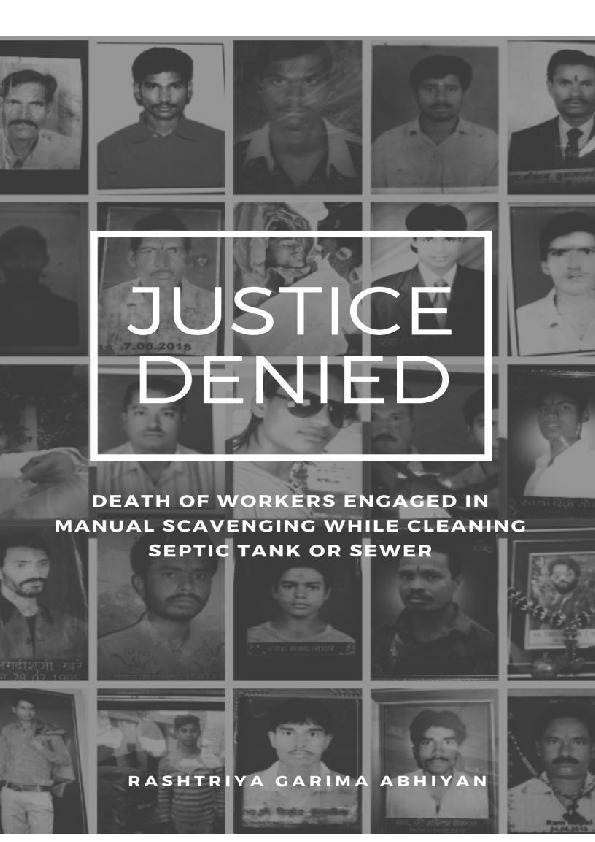 Findings of the report:

In complete violation of basic human rights and dignity, Dalits of India continue to be pushed to practise caste based occupations such as manual scavenging. This type of discrimination emanates from the notion of purity and pollution and untouchability, deeply rooted into the mindset of upholders of caste in the country. The prevalence of caste based occupations such as manual scavenging,  is a prime example of how caste, as a social construct, continues to pervade economic activities and perpetuates discrimination, exclusion, ostracization and victimization. Dalits engaged in manual scavenging such as Valmiki, Mehtar, Dom, Bhangi, Har, Hadi, Ghasi, Olgana, Mukhiyar, Thoti, Hela and Halalkhor are compelled to perform the task of cleaning human excreta with bare hands or to clean sewer lines and septic tanks. This study is an attempt to understand and document the continued deaths of persons engaged in manual scavenging in sewers and septic tanks across India. Section 2 (1) p of The Prohibition of Employment of Manual Scavengers and Their Rehabilitation Act 2013 defines Septic tank as “a water-tight settling tank or chamber, normally located underground which is used to receive and hold human excreta, allowing it to decompose through bacterial activities”. Section 2 (1) q of MS Act 2013 defines sewer as “an underground conduit for carrying off human excreta, beside other waste matter and drainage waste”.

Persons mostly from the Valmiki caste are hired by municipalities and households through contractors to clean septic tanks or sewers. Though, it has been acknowledged as Manual Scavenging and prohibited under the MS Act 2013, this practice continues to prevail in revenue villages, Urban Agglomerations, Out growths, Census towns and Statutory towns. This illegal and inhuman practice consumes the lives of many every year. The primary focus of this study was to understand the progress on implementation of the MS Act 2013, socio economic condition of the families after the death of the deceased and to analyze legal course of actions in the incidents in which FIR was registered. The survey was carried out in 11 states of India in which the families of the deceased from the respective states were interviewed.

Stringent action against the employers: We strongly recommend that the Police to register FIR along with invoking appropriate sections of the MS Act 2013 and The POA Act 1989.

Penalizing the implementing the agency: the authorities must be held accountable and responsible for the deaths and must be penalized, as per MS Act 2013 and recent amendment of POA Act in relation to manual scavengers

Standard operating Procedures for sewer and septic tank cleaners: Although MS Rule 2013 laid down precautionary measures to be undertaken before the work starts, at the time of work and after completion of the work but failed to give due process to be followed for the persecution, FIR, trial, proceedings.