UN experts on gender discrimination voiced concerns over the difficulties elected Dalit women face in Nepal, the need for proportional inclusion of Dalit women in the Judiciary, and extreme poverty faced by many Dalit women as a result of discrimination and stigmatization. The comments were made by the CEDAW committee members at the review of the 6th periodic report of Nepal, on 23 October 2018. 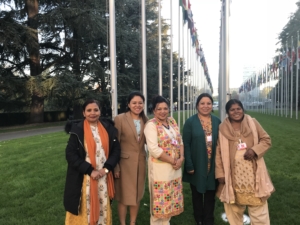 The Feminist Dalit Organization of Nepal (FEDO Nepal) and IDSN presented a joint civil society report, denouncing a number of instances of discrimination against Dalit women, such as the very low representation level in government, the lack of specific legislation on multiple forms of discrimination, like gender and caste, stereotyping,  and cultural prejudices against Dalit women.

During the briefing with civil society organizations, Durga Sob, founding president of FEDO Nepal, delivered a statement to the committee members, denouncing the low level of Dalit women in government and parliament.

She stressed that ”on higher level posts of Deputy /vice chair, only 16 Dalit women have seats among 753 women or only 2%” of the total amount of women. She also stated that “those women in higher posts continue to undergo discrimination and humiliation from so-called upper caste, therefore finding it difficult to address the need of their fellow Dalits in general and Dalit women in particular”.

Durga Sob also told the story of Buddhimaya Vishwakarma, a Dalit woman who was beaten by members of upper-castes while fetching water in her village. Even though Buddhimaya obtained judicial redress for the violation suffered, she still continued to suffer humiliation in her village, leading to a severe state of emotional harm and considerable financial losses in order to maintain her family.

During the dialogue with the government, the Committee experts inquired of the Government on the enactment of a comprehensive legal definition of gender and its intersectional forms, which affects Dalit women. The Committee also voiced concern on the difficulties elected Dalit women face in order to represent their interests, mostly due to lack of capacity to perform the relevant duties or to discrimination and stereotypes regarding their place. The experts also underlined the need for proportional inclusion of Dalit women in the Judiciary. Moreover, the experts inquired the government on the measures taken to remove Dalit and rural women, and other vulnerable groups, from extreme poverty, in which 25% of the population remains.

The CEDAW Committee comprises a group of 18 experts on women’s rights that monitor the implementation of the CEDAW convention. At the end of the current 71st session, the experts will meet in private and issue its concluding observations, on the basis of the reports received from civil society, government and other stakeholders, in order to formulate recommendations to the Nepalese government for the implementation of the CEDAW domestically. Once the concluding observations are released – IDSN will post an article on these also.

In the videos below the Dalit women that formed part of the delegation share their thoughts on the review and there is also a video of Durga Sob giving her statement at the civil society briefing.

**UPDATE – following the review the committee has released it’s recommendations reflecting the comments on caste and Dalit rights made. Please see this article for more information >>

Upashana Pradhan from FEDO speaks about the UN CEDAW committee