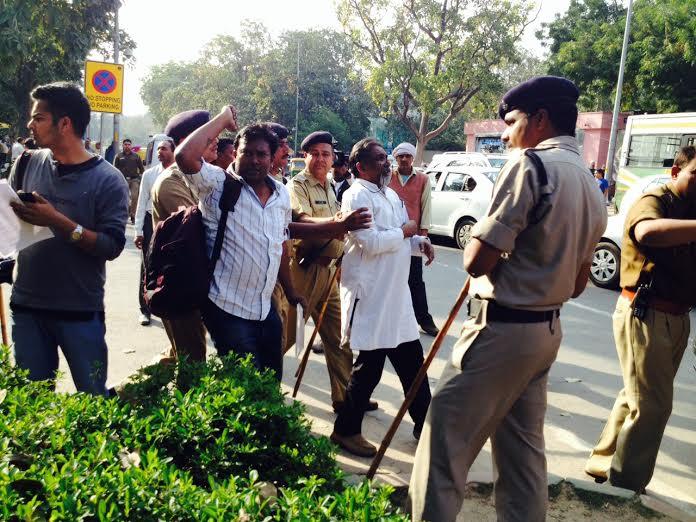 Dalit leader Paul Divakar and 29 other activists were arrested following a peaceful gathering of over 500 students gathered in front of the Indian parliament to protests severe cuts to budgets allocated to Dalit and Adivasi (Tribals) welfare and upholding of their rights. The arrests underscore a deeply concerning trend for Government stifling of voices of dissent in India.

Massive cuts to provisions for education of Dalits and Adivasis were central to the protest and public meeting, organised by the Campaign of Adivasis and Dalits for Rights on Education (CADRE 2201).

“The budgeted expenditure by the Modi government for the most marginalised sections – Dalits and Adivasis – of our country has seen a colossal decline this year. We strongly protest this unilateral reduction in budgets for Dalits and Adivasis,” said Paul Divakar, general secretary of National Campaign on Dalit Human Rights (NCDHR).

According to Ramesh Nathan, General Secretary, National Dalit Movement for Justice (NDMJ), the activists were about to submit a ‘Memorandum of Demands’ to the Union Minister of Human Resource Development, over unfair budgetary allocations within the education sector for Dalit and Adivasi students, when they were arrested by the police.

Speaking at the protest Abhay Xaxa, coordinator, CADRE 2201, spoke of the ramifications of the budget cuts for education prospects for Dalits and Adivasis saying that,

“The general thrust of the budget is to strengthen the corporate forces and intensify the exploitation of the Adivasis and Dalits. So it is not surprising that the allocation of funds for education has declined.”

The budget cuts made to the Scheduled Castes and Scheduled Tribes sub-plans (SCSP & TSP), amount to a 60% cut in allocations for Dalits and a 53% cut in allocations for Adivasis, according to Paul Divakar. The cuts were made despite several meetings held between NACSTL, a coalition working to further the rights of Dalits and Adivasis and secure the budget components set out for them, and the Ministry of Finance. The sub-plans are meant to ensure that Dalits and Adivasi who suffer discrimination limiting their access to general budget resources are secured allocations.

Campaigners are saying that the Modi administration has chosen to steal from the disadvantaged to give gifts to the corporate sector in the form of tax cuts. According to Paul Divakar,

“A closer examination of the drastic cuts in social sector expenditures such as the SCSP and TSP shows a blatant Modi Government disregard for poor Dalits and Adivasis and their concerns, and a downright dismissive attitude to the rights-based paradigm.”

After detaining the activists at the police station they were released. However, the cuts to welfare for the countries most disadvantaged groups and attempts to stifle their voices of dissent in reaction to this decision are deeply concerning.

Government clampdown on protest over unfair budgetary allocations in education for SCs/STs (Two Circles)
Where are the Dalits and the Adivasis in the Union Budget? (The Citizen)
Denial And Diversion Of Plan Fund: The Great Adivasi-Dalit Rip-Off (Tehelka)