Following the attack on 200 Dalit families by a dominant caste mob that was angered by an inter-caste marriage, many Dalits have fled Pabnava village in Haryana. Those who remain feel extremely insecure. 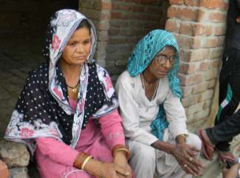 The authorities in the Indian state of Haryana have failed to protect the human rights of Dalits and must be held accountable for their callous attitude. This is the conclusion of a fact finding team that recently visited the village of Pabnava in Haryana where 200 Dalit families came under attack on 13 April.

The violent attack by approximately 400 members of the dominant ‘Rod’ community was triggered by the inter-caste marriage between a Dalit man and a woman from the dominant caste. Having failed to force the couple to divorce, the mob went on a rampage in the village’s Dalit quarter and ransacked the homes of 200 families. Six Dalit villagers were injured in the attack.

Following the incident, a fact finding team comprising of lawyers and human rights defenders – including members of the National Campaign on Dalit Human Rights (NCDHR) – visited Pabnava in Kaithal district and reported that many Dalit villagers have fled their ruined homes. The few remaining Dalits are living in fear.

“The deserted houses in Pabnava are mute witnesses to the gloom and fearful atmosphere that arises in the trail of several such instances of brutal caste violence,” the fact finding team said in a press release that accompanied the presentation of its report on 26 April.

The team accused the police and local administration of providing inadequate safety for the Dalit villagers and said that the government of Haryana had acted in a very casual way.  It also noted that the state had “earned notoriety for large and gruesome cases of caste violence against Dalits”. These included a large number of rapes against Dalit women last autumn.

The fact finding team has issued a set of recommendations which include a call for the arrest of the 28 suspects who remain free (until now, 24 have been arrested); for action to be taken against a police official who neglected to protect the Dalit community; and for compensation to be paid to the affected Dalit families.

Large number of Dalits have fled village (The Hindu)

Documents on India in IDSN’s database