When Bangladesh was reviewed by the UN’s Universal Periodic Review (UPR) mechanism on 29 April, concerns were expressed about the human rights situation of the country’s minorities, including Dalits. 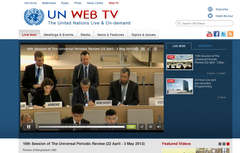 The UPR session was shown online via UN Web TV.

Vulnerable and marginalised groups in Bangladesh, including Dalits, need more protection from the country’s government, a number of states declared during the UPR session of Bangladesh in Geneva. Two states, Slovenia and the Holy See, made specific references to Dalits in their interventions.

The Slovenian representative noted that Dalits continue to suffer discrimination and recommended that the Government of Bangladesh address their needs in a national action plan. The Holy See mentioned the need to improve the conditions of vulnerable groups, including Dalits.

The idea of a national action plan to eliminate discrimination against Dalits was put forward in the run-up to the UPR by a group of NGOs, including the Bangladesh Dalit and Excluded Rights Movement (BDERM) and IDSN. In a joint submission on ‘The Human Rights Situation of Dalits in Bangladesh’, the NGOs also stressed the importance of introducing legislation to protect Dalits, one of the country’s poorest and most marginalised communities.

During the UPR session, the Bangladeshi Minister of Foreign Affairs, Dipu Moni, confirmed that an anti-discrimination law is in the making. Such a law is expected to include provisions on caste discrimination. She also noted that special measures had been introduced in some sectors for socially marginalised and vulnerable groups that experience discrimination.

Dalit human rights groups in Bangladesh as well as IDSN acknowledge that the Government of Bangladesh has paid more attention to the Dalit issue in recent years, including allocating funds for their welfare. “However, it has not yet fully recognised the scope of human rights violations based on caste, work and descent in the country, and has not yet taken any comprehensive action to address the situation”, BDERM President Mukhul Shikder said.

At a side event organised by a group of Bangladeshi and International NGOs on the status of minorities in Bangladesh, the Chair of the country’s Human Rights Commission (NHRC), Mizanur Rahman, stated that the Dalits were the most vulnerable of the marginalised communities today.

He added: “The NHRC is involved in the process of drafting the anti-discrimination legislation which will be subjected to a national consultation and presented to concerned ministries within 45 days. The non-discrimination provisions of the constitution have not proven to be effective, and there is a need to shift to a different gear”.

At the side event, which was held immediately after the review, human rights defenders groups committed to stand by the vulnerable groups and noted the particular need to protect women of minority communities from human rights violations.

When the human rights record of Bangladesh was reviewed in February 2009 during the first UPR cycle, no states made specific recommendations on caste discrimination and the protection of Dalits despite civil society inputs on the situation. However, several recommendations on minority protection, poverty eradication, access to justice and public services and other issues were of relevance to Dalits.

Documents on Bangladesh in the IDSN database

UN information on the Bangladesh UPR

Side event: ‘Status of Minorities in Bangladesh’