On the last day of her visit to India, the UN Special Rapporteur on violence against women, Ms Rashida Manjoo, said that Dalit women experience some of the worst forms of discrimination and oppression. 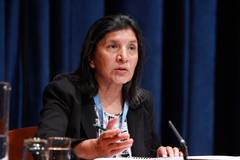 India lost an opportunity when introducing new rape legislation recently. The legislative measures adopted in the wake of last December’s brutal gang rape incident in Delhi fail to address inequality and discrimination issues that are closely interlinked with violence against women.

This is one of the messages contained in a statement from the UN Special Rapporteur on violence against women, Rashida Manjoo, who concluded an official mission to India yesterday. She stressed that a legislative and policy approach is insufficient without addressing discrimination and violence and the pervasive culture of impunity in India.

Many of her observations are of particular relevance to Dalit women and women from other oppressed and marginalised communities. The Special Rapporteur mentioned caste-based discrimination and violence as some of the numerous manifestations of violence against women and girls in India. Such manifestations are rooted in discrimination and inequality, and are strongly linked to the social and economic situation of women, she said.

Ms Manjoo noted that Dalit, Adivasi and minority women exist “at the bottom of the political, economic and social systems, and they experience some of the worst forms of discrimination and oppression – thereby perpetuating their socio-economic vulnerability across generations.”

In the concluding part of her statement, the Special Rapporteur summed up a number of recommendations from various UN bodies, one of which expressed grave concerns about the “continuing atrocities perpetrated against Dalit women” and mentioned the “culture of impunity for violations of the rights of Dalit women”.

These observations have been welcomed by the Dalit women’s rights platform, AIDMAM, which considers them “an indication of the failure of the Indian Government to protect Dalit women from systematic violence and discrimination”. An AIDMAM statement adds that “the perpetrators and the duty bearers enjoy impunity, and victims of brutal violence continue to be victimised.”

Rashida Manjoo travelled to several Indian states during her 10-day visit and met with officials as well as civil society representatives, including a number of Dalit women. Her report from the mission will be presented to the UN Human Rights Council in June 2014.

Statement by the Special Rapporteur on violence against women

IDSN input to the Special Rapporteur

Rape law changes welcome, yet an opportunity lost (The Hindu)