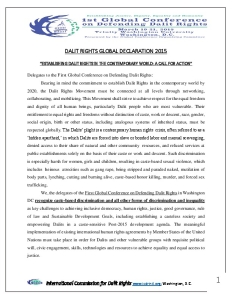 Following the successful Global Conference on Defending Dalit Rights, held in Washington DC from the 19-21 March, a declaration has been released demanding strong support from the UN and the United States to support the struggle to end caste discrimination and more action.

National governments are called upon to commit to ending caste-based discrimination and enforce the rule of law. Furthermore, the declaration refers to a new Caste Freedom Index (CFI) as a measurement and advocacy framework for addressing caste discrimination.

The text includes strong support for the Draft UN Principles and Guidelines for the Effective Elimination of Discrimination based on Work and Descent – urging the UN Human Rights Council to adopt this framework. It furthermore calls on the United States to sponsor a resolution for its endorsement.

General Recommendation 29 of the UN Committee on the Elimination of Racial Discrimination outlining that the term descent includes caste is also affirmed and the European Parliament October 2013 Resolution on caste-based discrimination, is welcomed, as are initiatives by the ILO and Special Procedure mandate holders. UN agencies, the international community and civil society are also called upon to protect and promote policy towards advancement of the rights of Dalit men, women and girls.

The declaration is supported by conference delegates and is available for download here.

Learn more about the 1st Global Conference on Dalit Rights