EU Special Representative for Human Rights, Eamon Gilmore and India and Nepal desk representatives of the European External Action Service (EEAS) met with IDSN and Dalit women activists from the Feminist Dalit Organisation – Nepal (FEDO) and All India Dalit Mahila Adhikar Manch (AIDMAM-NCDHR) to discuss caste-based violence against Dalit women in their respective countries. The meeting was held online on 24 November and Mr. Gilmore assured the women that the EU remained committed to working to end caste-based violence and discrimination. 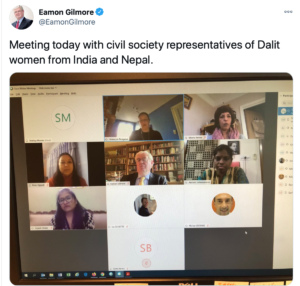 IDSN first met with Mr Gilmore soon after he took up his mandate in June 2019 and at the meeting on 24 November he reiterated his concern over the situation of Dalits, and described how the EU has been working on the issue through engagement with both civil society organisations and authorities in India and Nepal, but also by funding projects on the ground.

Mr. Gilmore showed specific concern over the multi-faceted impacts of COVID-19, the increase of cases of violence against Dalit women and the lack of implementation of laws meant to prevent atrocities against Dalits in both India and Nepal. He also noted IDSN’s concern over the use of “social distancing” as exacerbating the stigma already suffered by lower-caste persons and IDSN’s request to use the term ‘safe distancing’ as an alternative.

AIDMAM and FEDO representatives concurred in mentioning that the linchpin of change is the issue of access to justice for victims who, after being harassed, beaten, raped, or even killed, face further threats and harassment from dominant caste perpetrators to prevent victims to file a complaint. The police were also often complicit in covering up the crimes of the dominant caste perpetrators as exemplified in the recent Hathras case.

They insisted that though both India and Nepal have very good constitutions and laws to protect Dalits, the lack of implementation and higher caste representatives being present at all decision-making levels, in particular amongst polices forces and justice representatives, meant that enforcement was extremely weak. A much stronger effort needs to be focused upon the need for prevention and towards capacity-building of police and judiciary bodies to avoid that discrimination being perpetuated in full impunity.

Mr. Gilmore expressed his extreme discomfort at hearing about the atrocities suffered by Dalit women and the widespread impunity as the result of triple discrimination linked to caste, gender and economic status. He assured the delegation that discrimination and violence against Dalit women will continue to be part of the agenda in the EU’s engagement and dialogue with both governments.

Mr. Gilmore insisted that he was conscious that more efforts would be needed to ensure that these issues could be addressed thoroughly and that receiving concrete, verified, accurate and up-to-date information was extremely important.