The National Tribunal on Violence Against Dalit Women, organised by AIDMAM, heard over 45 testimonies of Dalit women who had been subjected to kidnapping, murder, physical assault, sexual violence and other crimes against them, and have yet to obtain justice. 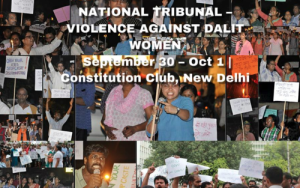 The cases were all horrific tales from the everyday lives of Dalit women in India and all had the fact in common that the police and legal system had failed to bring justice to the victims. A jury at the National Tribunal was therefore present to allow victims to seek a parallel course of justice.

The preliminary report just released describes that, among the many problems faced by Dalit women, brutal sexual violence is the most frequent in the cases heard. It furthermore describes the obstacles to gaining justice finding that,

“There is a collusion between the police, the medical officer, the investigative officer and all concerned authorities, which works to protect the perpetrators of the crime. Often these authorities belong to the same community as the criminals, and are also equally and violently prejudiced against Dalit women … Moreover, the very same authorities that are meant to protect her, heap further violence on her, making her position even more vulnerable.”

After listening to the cases that included reports of women and young girls being burnt, murdered or beaten with no recourse to justice, jury member Farah Naqvi, National Advisory Council said these stories were a wake-up call.

“I would be terrified to fight the battles these women have taken up. Let’s not tiptoe around this or try to be polite; we are a casteist society, deeply embedded in caste, class and community structures. We have to say loudly and without shame that our police, institutions and administration are casteist. If you are casteist, keep your poison to yourself. Do not poison your profession with it. The bottom line has to be accountability and we need to first fix it. Then begins the longer battle of ridding our society of casteism,” she said.

The jury found a few major issues to be recurrent in the many testimonies including:

In light of the 45 testimonies the report offers a number of concrete recommendations to combat this injustice aimed at the SC Commission and the Criminal Justice System, alongside recommendations on legal-aid, medical Issues, rehabilitation and relocation, strengthening Dalit women in local governance and supporting their resistance. The full recommendations can be found in the report.

Preliminary Report: National Tribunal – Violence Against Dalit Women(Prepared by the jury in consultation with activists)