Press release: The elected representatives of half a billion Europeans from 28 countries in the European Parliament (EP) today adopted a strongly worded resolution on caste discrimination. 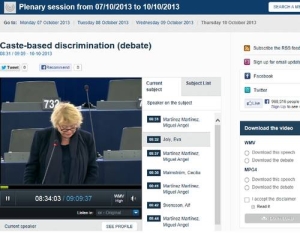 Eva Joly speaking during the debate which was webcast live.

Copenhagen (IDSN)/10 October 2013 – The European Parliament has sent a strong message of support to hundreds of millions of people all over the world who are subjected to caste discrimination by urging the EU to step up efforts to address a human rights issue that causes almost unimaginable suffering.

Prior to adopting a resolution on caste discrimination, MEPs from a wide cross-section of political groups spoke passionately about the topic and condemned this form of discrimination in very strong terms. Some even argued that goods from caste-affected countries should be boycotted, and there was broad agreement that EU institutions are not doing enough to address the issue.

The EP resolution calls on EU institutions to recognise and address caste discrimination on par with other grounds of discrimination such as ethnicity, race, religion, gender and sexuality; to include the issue in EU legislation and human rights policies; and to raise it at the highest level with governments of caste-affected countries.

In the debate’s opening speech, Green MEP Eva Joly, chair of the Committee on Development that tabled the resolution, quoted the Indian Prime Minister, Manmohan Singh. A few years ago he compared caste discrimination in his own country to South Africa’s despised apartheid system. “Despite this declaration, despite the abolition of ‘untouchability’ in the Indian constitution, despite laws, 260 million people  are suffering daily from atrocities committed with complete impunity,” Ms Joly said, referring to the estimated number of people across the globe who are subjected to caste discrimination. Most of these live in South Asia and are known as Dalits.

Other speakers noted that caste discrimination has no place in modern, democratic societies. Labelling it “one of the biggest paradoxes of the 21stcentury”, the liberal MEP Leonidas Donskis noted that “it is imperative to ensure that the fight against caste-based discrimination becomes part of the standard EU human rights language and is systematically included in the Union’s efforts worldwide.”

EU Commissioner Cecilie Malmström claimed that this was already happening and listed a number of tools that the EU system is using to address the issue, including human rights dialogues with affected countries, and development programmes. However, her statement was met with some scepticism from MEPs.

“I don’t really agree that this is put on the agenda quite often,” said Alf Svensson of the European People’s Party Group, and others went further: “If we have all these EU instruments, and 260 million people still suffer caste discrimination, we are failing,” Michael Cashman of the Progressive Alliance of Socialists and Democrats said.

Many MEPs spoke of the brutal violence that Dalit women and children are subjected to. Others argued that trade relations with caste-affected countries should be examined. One speaker mentioned the importance of the draft UN guidelines to eliminate caste discrimination, and urged the EEAS to promote them. Speaking on behalf of the GUE group, MEP Paul Murphy praised the work of Dalit activists, saying that they were pointing a way forward to confine “this barbaric feudal remnant to the dustbin of history.”

IDSN and its members now urge EU institutions to take action on the numerous points raised in the resolution in order to address caste discrimination. Speaking from the EP in Strasbourg, IDSN coordinator Rikke Nöhrlind and Manjula Pradeep, IDSN Executive Board member from India, noted that the resolution had secured very broad cross-party backing.

“We were encouraged to hear from Commissioner Malmström that caste discrimination is a high priority for the EU, and that it wants to fight against it. However, we also agree with the many parliamentarians who say that more could be done. Caste discrimination is one of the world’s most serious human rights problems, and we believe that the EU can play an important role in ending it.”

Download the motion for a resolution on caste discrimination

Click here for the oral questions on caste discrimination

Watch a webcast of the EP debate on caste discrimination

Tweets are sent out via www.twitter.com/idsnupdates

The European Parliament and caste discrimination

The links below were added on 18 October

Transcript of the debate on 10 October

EP press release on the resolution

The world is looking at caste discrimination, finally (New Internationalist)