Almost 16 years after the savage killings of 58 Dalits in a Bihar village, the survivors’ fight for justice has suffered a severe blow. On 9 October, the Patna High Court acquitted 26 men who were sentenced for the crime three years ago. 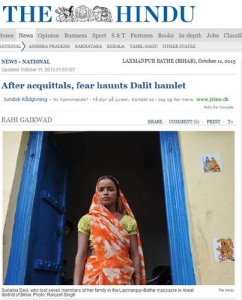 The Dalit villagers are now living in fear, The Hindu wrote.

“I fear they will come back again,” Baudh Paswan, a resident of Laxmanpur Bathe village, told the Hindu newspaper last week. He was referring to the large group of armed men who went on a brutal killing spree against his Dalit community on 1 December 1997.

Baudh Paswan lost seven of his family members that day. Altogether, the attack on Laxmanpur Bathe claimed 58 lives, of which 27 were women and 16 children. The assailants were members of an ‘upper caste’ militia in Bihar that targeted suspected Maoist sympathisers and Dalits in a series of massacres in 1996-1997. In 2010, 26 of the 42 accused were sentenced at a lower court in Bihar – 16 of them to death.

At the time, the verdict was met with a certain level of relief by the Dalits in Laxmanpur Bathe as they felt that some kind of justice had been achieved. Such sentiments have now been replaced by fear, shock and anger following the acquittal by Patna High Court of the 26 men who were sentenced in 2010.

The two judges ruled that the witnesses in the case – there had been 90 of them at the original trial – were “not reliable”. One of the witnesses, Laxman Rajvanshi, said that there was no law to protect his community. He told The Hindu: “How could I not have recognised them? We stay in the same village and I see them about 10 times a day! We worked on their fields. We had no inkling of this attack, otherwise we would have been alert.”

According to media reports, the ‘upper caste’ villagers in the area have celebrated the acquittals and threatened the local Dalits with reprisals as it now appears that they can attack them with impunity.

Acquittals have happened in a number of other massacre cases in Bihar, usually involving killings of Dalits and other marginalised groups by members of ‘upper caste’ militias: “Almost inevitably, in cases where the victims are poor, landless peasants and Dalits, the perpetrators have remained beyond the reach of law,” The Hindu wrote in an editorial.

“If a high-profile case such as the Laxmanpur Bathe massacre can collapse in this manner, India’s criminal justice system can infuse little confidence in its people,” the newspaper added.

The Bihar government has expressed dissatisfaction with the judgment and will now take the case to the Supreme Court.

Atrocities that no longer shock (The Hindu, 15 October)

The doubt of the benefit (The Hindu, 14 October)

The nation did not want to know about Laxmanpur Bathe (Kafila, 13 October)

Anger among India’s ‘untouchables’ after 26 people acquitted (The Telegraph, 10 October)

‘Who killed my family then?’ (Rediff News, 10 October)