The Global Slavery Index 2014, released by the Walk Free Foundation, singles out India as the country in the world with the most slaves and sees caste at the root of slavery in India. Caste-affected Mauritania tops the Index on percentage of the population in slavery. 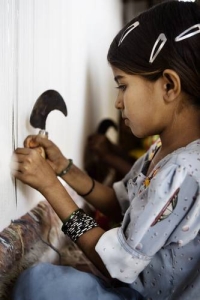 Caste-based slavery is present in several other countries topping the Index including Pakistan, Bangladesh and Nepal. In fact, according to the data collected, more than half the world’s slaves (54%) are found in countries with caste-systems.

In the India country section of the report the authors see discrimination against Dalits, Adivasis and minorities to be at the root of slavery in India stating,

‘’Dalits have the least social protections and are highly vulnerable to severe forms of exploitation and modern slavery. The limited ability for people to move out of this group increases their vulnerability.”

In relation to slavery in Mauritania where four people out of 100 are considered modern slaves the authors write,

“Also known as hereditary or chattel slavery, slave status is inherited generation to generation and is deeply rooted in social castes and the wider social system.”

In the Pakistan country study the report finds that notions that lower castes living in Pakistan are not considered equal citizens reinforces their vulnerability to slavery as they are left little other choice.

The connection between caste discrimination and slavery is widespread and deep-rooted and caste-based slavery practices such as manual scavenging and caste-based prostitution continue despite being outlawed.

In the article ‘Poverty and caste fuelling child labour in South Asia’, Harvard child labour expert, Siddharth Kara, comments that caste is a key factor underlying child slavery in India. He says that, “Every single child labourer that I have documented comes from a highly impoverished family unit and belongs to a low-caste or minority community.”

The index is claimed to contain the most authoritative data on slavery conditions worldwide, drawing on 10 years of research into slavery. It ranks 167 countries according to the number of people living in slavery, the risk of enslavement and the robustness of government responses to the problem.

Last year’s index similarly highlighted the correlation between caste and slavery where four out of five of the countries deemed the worst slavery offenders were caste-affected countries. Read the 2013 Slavery Index analysis here

UN experts call for end to caste-based stigma and slavery