A new report following up on modern slavery in Indian spinning mills, finds that despite initiatives launched to end conditions of forced labour, the situation remains alarming. Efforts of clothing brands and retailers to end this, lack scale and conviction. Due to their marginalised status and lack of alternative opportunities, the majority of girls working in these factories are Dalits. 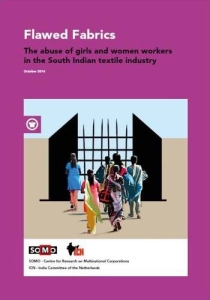 The report “Flawed Fabrics” released by the India Committee on the Netherlands (ICN) and the Centre for Research on Multinational Corporations (SOMO), states that girls as young as 15 are still facing appalling labour conditions, that amount to forced labour, in South India’s spinning mills. They live in very basic company-run hostels and are hardly ever allowed to leave the company compound. The researched spinning mills have Western companies and Bangladesh garment factories among their customers.

The spinning mills are found to recruit poor and marginalised girls, predominantly Dalits, by luring their families with false promises of education and proper living conditions at the hostels, as well as legal working conditions and a bonus payment, which is often not awarded once the girls finish their work. According to the report, the reality the girls are met with is often found to be a 68-hour working week, no contracts or payslips, and being locked inside factory and dormitory compounds during working and non-working hours.

As for promises of furthering the girls education one of the girls interviewed comments,

“I don’t like working in the spinning mill. My parents sent me here. During the recruitment process they asked the agent if the mill could support my education. This was accepted by the agent but until now the factory has done nothing to help me continue my studies.”

One of the main concerns voiced by the girls interviewed is the lack of freedom to leave the hostel and factory, fear of the supervisors and missing contact with their families. One girl comments,

“I do not like the hostel; there is no entertainment and no outside contact and it is very far from the town. It is like a semi-prison.”

Violations of key human rights and labour rights were found to be prevalent at the mills investigated including to freedom of movement, freedom of association and violations amounting to conditions of forced labour. The girls were found to be unaware of these rights or under the impression that girls could not join or form trade unions. As one worker comments,

“I don’t think that the workers are having much freedom of joining the trade union because all the workers here are girls.”

The researchers found that the manner in which the girls were recruited under false pretences amount to trafficking and the conditions including the physical confinement in the work location and psychological compulsion backed up by a credible threat for non-compliance, amount to forced labour.

The workers felt that the supervisors were threatening and hostile towards them and scolded them for things like asking for leave because they were ill, committing any mistake, refusing overtime or going to the toilet too often.

It is noted in the report that over the past few years, civil society organisations, individual companies, multi-stakeholder initiatives, business initiatives and governmental actors have all undertaken efforts to curb abusive employment and labour practices in Tamil Nadu. Buyer companies’ monitoring and improvement efforts are generally limited to the units that produce end products. They do not focus on earlier production phases, such as spinning, weaving and dyeing.

‘Flawed Fabrics’ offers a list of key recommendations on how to move forward in combatting forced labour in the South India textile industry, addressing a range of different stakeholders.

This report is the third in a series of reports on forced labour in the South Indian textile industry, focusing on what has been termed the ‘Sumangali Scheme’, including the report Captured by Cotton (2011) and Maid in India(2012) and the short paper Time for Transparency (2013).

I Tried to See Where My T-Shirt Was Made, and the Factory Sent Thugs After Me (Mother Jones)