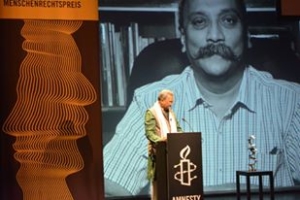 The award ceremony took place at the Maxim-Gorky-Theatre in Berlin on 25 April. In her tribute to Henri Tiphagne, AI Germany Director Selmin Çalışkan noted that his “passionate advocacy in the fight against torture and discrimination in India is exemplary and serves as an inspiration for activists all over the world who are campaigning for human rights.”

Ms Çalışkan added that the award winner had been supporting victims of state violence for more than 20 years and that his human rights work had made him a target for the authorities. Between 2012 and 2014, the bank accounts of People’s Watch were repeatedly frozen by the then-government of India, until the organization won a court appeal.

In his acceptance speech, Henri Tiphagne thanked Amnesty International for the award and added that he was “humbled to accept this prize on behalf of all the brave women and men who tirelessly campaign for human rights in India. However, the space for civil society activists is shrinking constantly. The government leaves us no space to breathe.”

Henri Tiphagne founded People’s Watch in the mid-1990s to fulfill his vision of a society free of caste-based discrimination and human rights violations. Since then, the struggle against caste discrimination has been an important part of the organisation’s work. During his stay in Germany, he has made several comments on the caste issue in interviews with German media.

“Caste discrimination takes on different, violent forms. We fight against all these forms,” Tiphagne said in a tv-interview with the ARTE channel. As an example he mentioned the health system where “we make sure that the poorest patients who go into hospital are not subjected to discrimination, for example when doctors do not want to treat them because they come from an ‘untouchable’ community.”

Henri Tiphagne also gave an interview to the respected weekly newspaper, Die Zeit. He stressed that most of the victims of state violence are people from lower castes. When the interviewer noted that caste discrimination is officially banned and that a Dalit had even become President of India, he responded that there had been some positive developments in Indian society, but added that “any change that threatens the influence of men, higher castes or powerful business circles, provokes counterattacks.”

“We are now in this phase of counter-violence. Those who fight for human rights, often pay a high price. Civil society is under pressure,” Henri Tiphagne said.