Report: Dalits hit hard by 2015 flooding in India, no relief in sight

An assessment report of the situation in Cuddalore District, Tamil Nadu, following devastating floods on 9 November, 2015, finds that Dalit households are the main victims of the flood and are not receiving relief from the Government, despite non-Dalits having received such relief. Statistics in the Cuddalore report reveal that 95% of the houses that were found damaged due to the flooding, are Dalit houses, while Dalits have not received any shelter relief from the Government. The report “No Respite for Dalits in Disaster Response, Tamil Nadu” has been released by National Dalit Watch and Social Awareness Society for Youth – Tamil Nadu.

The assessment team surveyed 8392 households, just under 41% of these were Dalit households. Some of the most striking statistical findings in the report reveal that 90% of those injured in the flooding were Dalits, 95% of the houses damaged were Dalit houses, 92% of livestock damaged belonged to Dalits and that 86% of crop losses were sustained by Dalits.

Despite their houses being the main damaged, no affected Dalit families surveyed have received shelter relief from the government and Dalit families were often not able to access relief camps set up in dominant caste villages, due to discrimination and distance.

“We don’t have walls and a roof, even after 20 days of floods, no officials have visited our village till now, even the village council (Panchayat) president who is from the dominant community is totally biased and not concerned regarding our situation.” Dalit respondent from Parankipettai panchayat 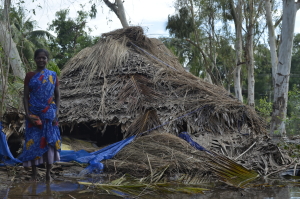 No Dalit families have received food rations through the Tamil Nadu state-run public distribution system (PDS) – even 10 days after the flooding. Dalits surveyed explain that often food relief has been given to non-Dalits living in concrete houses but that Dalits are left hungry.

The report states that in 90% of Dalit villages there is no supply of safe water and public water sources have been destroyed or contaminated. Dalits in some villages have also explained that dominant caste persons have refused to allow them to take water from the sources owned by non-Dalits or in the dominant caste locations.

There is a desperate lack of immediate medical services in most Dalit villages despite the spreading of water borne disease. Many Dalit children are suffering from fever and are not receiving treatment. 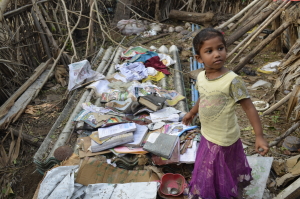 The immediate needs of Dalits in the affected villages include rescue and evacuation, immediate food assistance, shelters, health services, access to clean water and sanitation services, and recovery and compensation including rebuilding of schools. A detailed needs assessment is presented in full in the report.

The report also offers detailed recommendations for fulfilling these needs. Among specific rescue and relief recommendations offered are key recommendations to authorities and other relief providers, including, involving Dalits in the relief and rehabilitation efforts, initiating multi-stakeholder dialogues, investigating cases of caste discrimination in the relief efforts and assessing Dalit losses and compensating them adequately. The report also recommends the urgent initiation of a task force to strategize the “Actions towards inclusive disaster risk reduction” at District level.

The organisations behind the report warn that history is repeating itself as National Dalit Watch has previously in connection with the 2004 Tsunami, and many other disasters in India, documented the disproportionate effects of disasters on Dalit households and discrimination in rescue and relief efforts.

Unfortunately the report is yet another piece of the evidence of Dalit vulnerability to natural disasters and caste discrimination in relief efforts that has been building for many years, last raised by IDSN in an urgent appeal in relation to the Nepal earthquake. IDSN’s publication, Equality in Aid, collating cases and offering recommendations, is also very relevant in this latest instance.

Download the full report: “No Respite for Dalits in Disaster Response, Tamil Nadu”

Dalits in Pakistan suffer from severe drought – despite promises to act

Drought in Pakistan kills over 100 children – many are Dalits