Dalits voicing their rights in Bangladesh 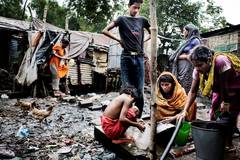 On the 16-17 of January this year, the first ever Bangladesh Dalit National Human Rights Conference was held in Dhaka, to bring a voice to the approximately 5.5 million Dalits, not adequately represented in Bangladeshi politics or decision making bodies.

The conference, organised by the Bangladesh Dalit and Excluded Rights Movement (BDERM) and Nagorik Uddyog, drew around 300 representatives from Dalit and excluded communities all over Bangladesh as well as political leaders, intellectuals, educators, and human rights activists.

22 papers were presented and discussed by panellists and the audience, who actively engaged with the main topics of the conference – recognition of Dalit rights; employment, housing and healthcare for Dalits; Ambedhkar’s teaching; Dalit women; social and political empowerment; poverty, untouchability and discrimination. There was wide media coverage of the national conference in Bangladesh, which illustrated the increasing recognition of this community’s demands for equal treatment and increased political participation.

The Conference took place in the lead up to the 4th Universal Periodic Review (UPR) of Bangladesh held on 4 February, and provided important input for  ten key recommendations on the socio-economic problems, legal and constitutional protections, and the issues of discrimination on the basis of caste and lower status in Bangladesh. These recommendations also drew on the findings in the UPR report on “The human rights situation of Dalits in Bangladesh” prepared by IDSN, BDERM and Nagorik Uddyog in advance of the review by the Human Rights Council. In effect, the summary of stakeholders’ information prepared by the OHCHR referred extensively to the issue of caste-based discrimination and the situation of Dalits in the country.

In addition to these recommendations and the report, a coalition of 17 human rights and development organisations (the Human Rights Forum on UPR, Bangladesh), including Nagorik Uddyog and BDERM, submitted a joint UPR report and a comprehensive list of issues to reflect crucial civil society issues, which should be addressed as part of the review. The forum issued the following as part of a statement reflecting on the UPR dialogue process,

“The UPR forum… welcomed declarations by the Bangladesh Government to ‘hold war crimes trials in consonance with international standards’, to ‘end the culture of impunity’ and to declare ‘zero tolerance for torture and extra-judicial killings’ and bring to account those found responsible for such acts, and ‘recognizing the high-handedness of certain agencies’”. They also welcomed the holistic approach [by the Government] to considering both civil and political and economic and social and cultural rights.

Forum Members however regretted that – with the exception of these declarations – the Minister’s statement amounted largely to a rhetorical statements of principles, and failed to provide any clear time bound or actionable commitments on specific measures to be adopted to transform such statements into reality.”

Moreover, only one state raised questions about the situation of Dalits in Bangladesh and the delegation did not address this issue in their presentation in the Interactive Dialogue with the Human Rights Council on 4 February.

A draft report from the UN working group on the UPR Bangladesh has been released summarizing the main concerns raised by other states and the delegation’s response in the Interactive Dialogue in the Human Rights Council.

In the UN Forum on Minority Issues in December 2008, the human rights situation of Dalits in Bangladesh was also addressed by Meghna Guhathakurta in a speech about access to education for minorities.

Link to more information about the Universal Periodic Review (UPR)

Newspaper article in The New Nation about the Conference

Newspaper article in The Daily Star about the Conference

Links to all documents mentioned:

Joint UPR report prepared by a coalition of 17 NGOs in Bangladesh. See para. 60-61 for a section on caste discrimination.