The UN Special Rapporteur on Violence against Women, Dubravka Šimonović made a preliminary assessment on violence against women in Nepal, after her official visit to the country, which took place from the 19 to the 29 November. On the same occasion, she released an urgent appeal for the Nepalese State to step up efforts to fight against impunity and to secure access to justice for victims of gender-based violence. 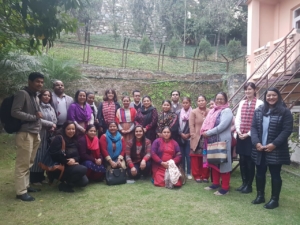 Dalit women meet the Special Rapporteur on Violence against Women.

In her preliminary assessment, the Rapporteur warned that:

“[…] despite the legal protection, Dalit women continue to face multiple forms of discrimination in reality. Their vulnerable economic status, combined with the patriarchal values, exposes them to various forms of violence.”

Moreover, Ms Šimonović noted that Dalit women are among groups who encounter multiple and intersecting forms of discrimination and violence, particularly through,

“the persistence of deeply rooted gender discriminatory and stereotyped attitudes and behaviours, as well as patriarchal social norms, including a tendency for son preference; the normalisation of violence and the social stigma attached to reporting violence, continue to pervade society at all levels, disproportionately affecting women and girls who face intersecting and multiple forms of discrimination.”

The Rapporteur was also concerned about trafficking in Dalit and Badi women and girls, particularly given the lack of a specific definition of the crime trafficking domestically and of guidance to deter perpetrators. She urged the State to revise the bill to amend the Human Trafficking and Transportation (Control) Act in order to bring it in line with the UN Palermo Protocol.

Ms. Šimonović encouraged the Nepalese government to adopt a specific National Action Plan on violence against Dalit and indigenous women, including temporary special measures (affirmative action) in order to accelerate participation of these groups at several levels of decision making.

The Rapporteur highlighted as positive the recognition of the rights of all castes, races and ethnicity in the new Constitution of 2015. She also recognized the new Caste-based Discrimination and Untouchability Crime Elimination and Punishment Act in 2017, as a positive step towards addressing caste discrimination, which affects disproportionately women.

IDSN and FEDO Nepal worked in close coordination to contribute to the Rapporteur’s visit to Nepal, synergizing efforts in Kathmandu, London, Copenhagen and Geneva. The Special Rapporteur also met with a large delegation of Dalit women at the FEDO nepal offices (see photo).

Ms. Šimonović will present the report on her visit to Nepal during the 41st session of the Human Rights Council, in June 2019.