The UN High Commissioner for Human Rights has presented his Annual Report to the UN Human Rights Council. The report features concern over the continuous deferral of applications for UN consultative status from civil society organisations and includes direct reference to IDSN’s application, which has been unjustly deferred by the UN NGO Committee for 10 years. 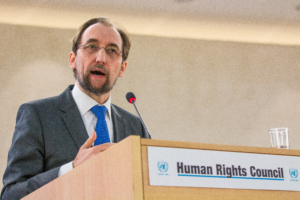 IDSN has issued a factsheet covering all the details of IDSN’s case, including over 80 questions received from India over the past 10 years and statements of UN experts addressing IDSN’s case.

In 2017, a UN side-event was held in New York, where prominent speakers addressed the fact that the NGO committee was not fulfilling its mandate and was seen to block rather than foster the participation of NGOs in UN human rights fora. The International Service for Human Rights (ISHR) and Freedom Now have also circulated a Background note on the NGO Committee alongside a note on options for reform of the NGO Committee.

Please see the extracts from the High Commissioner’s 2018 report here:

Footnote 12: For example, World Uyghur Congress, Alkarama (since 2015), Christian Solidarity Worldwide (since 2009), Committee to Protect Journalists (since 2012) and International Dalit Solidarity Network (since 2008). The application of Journalists and Writers Foundation was withdrawn by the Department of Public Information.

The European Parliament stresses the need “to promote an enabling environment for civil society and human rights defenders working with people affected by caste discrimination in order to ensure their security and avoid any impediments to, or stigmatization or restriction of, their work; stresses that such an environment should include access to funding, cooperation with UN human rights bodies and Economic and Social Council (ECOSOC) accreditation.”