UN Side-event: Blocking of civil society access to the UN must end now

In a UN side-event in New York several states and civil society representatives spoke about how the NGO committee, which grants UN ECOSOC accreditation, is effectively blocking legitimate civil society participation at the United Nations. Several shocking examples of harassment by the NGO Committee were shared including IDSN’s 9-year deferral, due to perpetual questioning from one state on the Committee. Participants at the event outlined courses of action that could be taken to reform the Committee and open the UN to civil society participation. 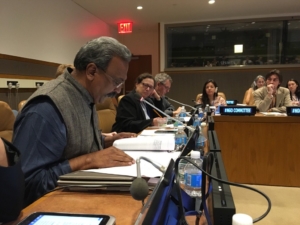 “It is vital that the Committee takes timely decisions on deferred applications and ensure that it carries out its work in an efficient, effective and transparent manner.” Mr. François Delattre, Permanente Representative of France to the United Nations said in a statement on behalf of Member State co-hosts France, United Kingdom and Uruguay. He then welcomed representatives of civil society organisations to share their experiences.

Speakers at the event commented that gaining ECOSOC status for their organisations had required immense resources and connections and raised concerns that smaller organisations, such as IDSN, without the same resources, may never get their accreditation unless the Committee is reformed.

IDSN has since 2007 sought to be accredited as an NGO with the United Nations. Since then IDSN has received 82 written questions, to which IDSN has always provided full, transparent and timely responses. During the process, no objections have been made to IDSN’s application on technical or procedural grounds. The 82 written questions have been posed by one member of the Committee, namely India, resulting in continuous deferral of the application by the Committee. Many of the questions contained similar content, or were responded to in the application or in previous replies.

IDSN Board Member, Henri Tiphagne, addressed the side-event with a powerful statement.

“This continuous referral is a reprisal, leading to the exclusion of millions of people who want to be included in the UN processes and contribute to strengthening the sensitivity of the UN to the violations of human rights faced by 260 million people.” Mr. Tiphagne said to participants at the event.

He explained how IDSN has been forced to operate through partners with ECOSOC accreditation who have kindly allowed IDSN to be present at the UN Human Rights Council in Geneva as their guests. He also explained how being at the mercy of the help of others to speak at the UN is humiliating and he found it disturbing that the humiliation faced by Dalits in India, can follow them into the corridors of the UN, where one state is effectively given the power to block them.

Speaking from the floor, a representative for the Office of the High Commissioner for Human Rights, explained that a report on civil society space was being written to be released next year and that a call for submissions to the report from states and civil society would soon be made. She stressed that in a previous report the OHCHR had deemed the NGO committee accreditation procedures “confusing and alienating”. She also urged States and civil society to contribute with examples, such as those given at this side-event, once the call was out.

Speakers from the panel offered many thoughts on how to reform the NGO committee including regulating membership and questioning and adding more layers of filtering to ensure that repetitive non-relevant questioning cannot occur and defer applications continuously. The full list of suggestions are available in the notes from the event – taken by IDSN.

“What is at stake here is not just the UN accreditation of IDSN, but the faith of excluded people across the world that the UN system will listen to them and hold states accountable to their human rights obligations.” Said Meena Varma, Acting IDSN Director, reflecting on the event. “Any glimpse of hope at seeking justice that there may have been, is rapidly smouldering at the hands of this Committee.”

The event was sponsored by the UK, France and Uruguay along with International Service on Human Rights (ISHR), the Observatory (OMCT & FIDH), CIVICUS, Amnesty International, Freedom Now, Connectas and the Jacob Blaustein Institute for the Advancement of Human Rights (JBI). Speakers at the event included Henri Tiphagne representing IDSN and other representatives of organisations whose UN participation was attempted blocked by the NGO Committee.

Full webcast of the side-event

IDSN’s notes from the side-event

Background note on the NGO Committee (by ISHR and Freedom Now)