Special Rapporteur Maina Kiai cites the case of IDSN as an example of how procedure is being used in the ECOSOC Committee on NGOs to prevent civil society organisations from getting UN accreditation. 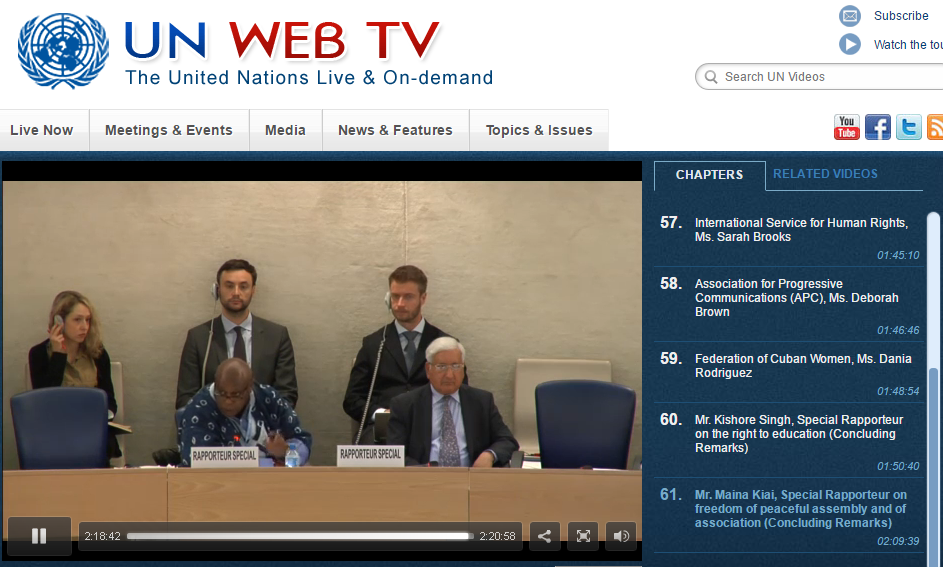 Maina Kiai (seated left) at the interactive dialogue on his report on fundamentalism. (UN WEB TV)

The obstruction of IDSN’s application for consultative status at the UN Economic and Social Council (ECOSOC) was discussed at the UN Human Rights Council on 17 June when the Special Rapporteur on the freedom of assembly and association, Maina Kiai, presented his thematic report on fundamentalism.

“Let me use the example of the International Dalit Solidarity Network which applied for ECOSOC status in January 2008. Up till today, 2016, it has not been given accreditation and has received 75 questions from one member of the NGO Committee, India. These questions are repeated over and over again,” Mr Kiai said during the interactive dialogue. He added that “procedure is being used to thwart IDSN” from gaining consultative status.

In his report, Mr Kiai had already noted that India has “placed impediments” to IDSN’s ECOSOC accreditation. His criticism of the Committee on NGOs and intervention on behalf of IDSN led to reactions from a number of countries during the interactive dialogue between the Special Rapporteur and the Human Rights Council.

India expressed “strong objection to the Special Rapporteur’s attempt of influencing the functioning of the UN NGO committee,” a sentiment which was echoed by the Russian delegate who accused him of breaching his mandate and called his behaviour “unacceptable”. Mr Kiai did not mince words in his reply.

“I hope that the states that raised these issues are not trying to suggest that indeed these UN bodies should be exempt from scrutiny if and when they are abusing or violating human rights. I hope that it is not the intention to say that because they are a group of states who are meeting that they can do whatever they want and that nobody should question them,” he said.

The report which examined various kinds of fundamentalism described caste-based systems in South Asia, the Middle East, Africa, and the Asia-Pacific region as “illustrative of cultural fundamentalism that violates the rights of those considered to be of inferior status”. It listed different ways in which discrimination against Dalits in India manifests itself, including “a lack of access to justice, threats to life, sexual and gender violence against women and girls.”

It also stressed the difficulties of Dalit human rights defenders: “Protests by Dalits are often met with violence and excessive use of force by upper-caste individuals and law enforcement officials. Dalit activists are also detained and prosecuted on serious charges such as terrorism.”

This section inevitably led to criticism from India as the country’s government vehemently opposed discussions of the caste issue in international fora such as the Human Rights Council: “As far as its references to our country is concerned, we would like to ask the Special Rapporteur whether such assertions have been verified and substantiated,” the Indian delegate said, thus questioning the accuracy of Mr Kiai’s information.

Reacting to criticism from India and other countries about his “purported lack of specialised knowledge,” Mr Kiai commented that he had requested time and again to be invited to India and a number of other states without ever getting any response. Consequently, he questioned the legitimacy of such criticism: “I think, in fact, that states should be precluded from attacking Special Rapporteurs on the basis that they don’t have information when they don’t invite them into their country,” he said.

Commentary on the UN Committee on NGOs by SR Maina Kiai