The UN Special Rapporteur on Human Rights Defenders has released a report with a strong focus on the dire situation of Dalit human rights defenders, following her 2011 visit to India. 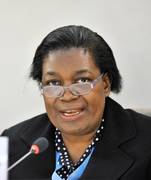 The UN Special Rapporteur on Human Rights Defenders, Ms. Margaret Sekaggya, has devoted a full sub-chapter of her report to stressing the unacceptable situation faced by Dalit human rights defenders due to threats and serious human rights abuses based on caste discrimination and failing systems of justice.

“Dalits’ rights activists strive for the promotion and realization of Dalits’ civil, political, economic, social and cultural rights. The range of human rights violations they suffer is appalling,” writes the Special Rapporteur.

She expresses awe at the work and courage of Dalit human rights defenders in undertaking their activities and details the key violations they face:

“From the dominant caste, Dalits’ rights defenders reportedly face, inter alia, death threats, beatings and caste-based insults in public places, direct and indirect destruction of their property/belongings; and filing of false cases against them.”

“With regard to the police and state officials, Dalits’ rights defenders reportedly have often seen their complaints not taken up and instead have been charged in false cases and filed counter cases, in collusion with the dominant caste community. They have also been summarily executed, forcibly disappeared, physically assaulted, arbitrary detained, named rowdy sheeters, branded as Naxalites and anti-nationals, and had their privacy invaded, including by being placed under surveillance.”

“Lastly, concerning family and community members, Dalits’ rights defenders are sometimes pressured to abandon their work in fear of intimidation and/or reprisals from the dominant caste, or to pursue paid activities instead owing to their dire financial situation. For instance, the relatives of a Dalit activist, tried to convince him to give up his work because they received threats from the dominant caste, stating that he would be killed if he continued his activities. The police arrested several persons who were later released on bail and are yet to be charged. These same perpetrators reportedly continue to threaten the family, urging the activist to withdraw his complaint.”

“The Special Rapporteur is particularly concerned at the plight of women Dalits’ rights defenders who face gender-based violence, or restrictions, regarding their work on the basis of their caste and gender.”

On the general level Ms. Sekaggya concludes that:

“Government authorities, including security forces, and the judiciary and human rights commissions, at the central and state levels, need to do much more to ensure a safe and conducive environment for defenders. Full accountability for violations against defenders is an absolute priority and the perpetrators must be brought to justice on a systematic basis.”

Her recommendations include that specific attention must be given by all authorities to Dalit human rights defenders and that a law on the protection with an emphasis on defenders facing greater risks, developed in full and meaningful consultation with civil society and on the basis of technical advice from relevant United Nations entities, should be enacted.  She also recommends that The Foreign Contribution Regulation Act, which places unnecessary restrictions on human rights NGOs, should be critically reviewed or repealed.

IDSN has recommended UN Member States to give recognition to the observations and conclusions in the Special Rapporteur’s report in connection with the presentation of the report at the 19th session of the Human Rights Council in March 2012.

The report is a landmark document containing some of the most explicit language and strongest recommendations on the general human rights situation in India and should be a must-read for all working with human rights in and with India.

Read the full report by the Special Rapporteur here

Read the news of the Special Rapporteurs India visit from 2011

Read more about IDSN’s work with the UN here

Read the Urgent Global Call, Declaration and Recommendations from the 2011 International Consultation on caste discrimination