India is failing to address its farmer suicide crisis, says the Center for Human Rights and Global Justice (CHRGJ), in a report released yesterday that has indentified an agrarian crisis in India where farmer suicides are on the rise and caste discrimination only exacerbates the problem. 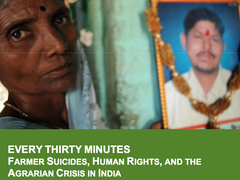 The report, Every Thirty Minutes: Farmer Suicides, Human Rights, and the Agrarian Crisis in India, released by the Center for Human Rights and Global Justice (CHRGJ) and the The International Human Rights Clinic (IHRC) looks critically at India’s farmer suicide epidemic.A quarter of a million Indian farmers have committed suicide in the last 16 years—an average of one suicide every 30 minutes. The report focuses on cotton farmers, who are particularly hard hit due to the dominance of multinational corporations of the cotton market and the use of genetically modified cotton seed that are expensive and lead to large debts.

“Over the past two decades, economic reforms—which included the removal of agricultural subsidies and the opening of Indian agriculture to an increasingly volatile global market—have increased costs, while reducing yields and profits for many farmers, creating widespread financial distress.  As a result, smallholder farmers are often trapped in a cycle of insurmountable debt, leading many to take their lives,” CHRGJ write in a press release on the issue.

CHRGJ Faculty Director and report co-author Smita Narula commented that, “On average, one farmer commits suicide every 30 minutes in India … It’s simply unacceptable to ignore a tragedy of such epic proportions and go on with business as usual. The Indian government’s limited interventions have failed to adequately assess or address this deepening crisis.”

The report also identifies caste discrimination as an issue that exacerbates the problem stating that,

“Research indicates that the farmer suicide crisis has caste-based dimensions in that “lowercaste” farmers, who often lack the necessary technical knowledge to cultivate commercial crops due to socio-economic barriers, may be hit particularly hard by the Bt cotton-debt crisis. “Lowercaste” farmers and their families also suffer from discriminatory laws and policies that prevent them from gaining the title to their land; farmers who do not have title to the land they farm are not officially considered farmers by the government and, thus, surviving family members are deprived of compensation when the head of the household commits suicide. Other forms of discrimination may also be at play on grounds prohibited by international human rights law. The Indian government should take steps to both understand the role that discrimination may play, and take affirmative steps to prevent, investigate, and redress this discrimination.”

Furthermore, the report finds that often Dalit farmer suicides are “insufficiently reflected in official data, as most do not have a clear title to the land they are farming.”

Recommendations in the report include a call for the India government to start “implementing effective preventive and compensation programs, undertaking necessary structural reforms, gathering more information on the suicide crisis and agrarian disaster, and regulating the activity of agribusiness firms.”

“It’s not uncommon these days for Indian farmers to address their suicide notes to the Indian Prime Minister and President,” said Ms. Narula. “This is a direct plea to the government to step in and take decisive action to save the plight of small-holder farmers in India. The Indian government must act now to regulate multinational activity and put farmers’ rights at the center of its agricultural policies.”

Watch a community video on BT cottonseed use in Andhra Pradesh