The campaign to end manual scavenging by the 2010 Commonwealth Games just got a push from a recent Supreme Court Decision, holding Government appointed District Collectors responsible for not eradicating the demeaning and hazardous practice. 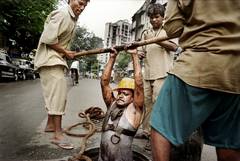 Manual Scavenging – a term used to describe the job assigned to India’s Dalits (often referred to as ‘untouchables’ or ‘outcastes’), consists of removing human excrement from dry toilets and sewers using basic tools such as thin boards, buckets and baskets carried on their heads. It is one of the worst forms of caste discrimination. The practice of Manual Scavenging was banned in India in 1993. However the political will to enforce the ban has been severely lacking. The Supreme Court Ruling in May 2009 brings an end to this abhorrent practice a little bit closer. For 1.3 million Dalits – not soon enough.

The ‘Liberation movement of those employed as scavengers’ (Safari Karamchari Andolan-SKA) were instrumental in getting the 1993 prohibition bill passed. Bezwada Wilson, National Convenor of the SKA, is encouraged by the supreme court ruling and comments, “This decision will not only let us point out cases in individual districts but also help us evaluate each Collector’s performance. For example in Rajasthan and Haryana, immediately after the decision, we saw orders from collectors to destroy many dry latrines and to book dry-latrine owners.” Wilson, however, also points out that the discriminatory mindset of ‘casteist’ Indian society needs to be challenged and changed, if the assignment of degrading jobs, such as manual scavenging, to India’s Dalits, is ever to be properly stopped.

Campaigning to stop manual scavenging by 2010

In 2007, the International Labour Organisation (ILO) Committee of Experts urged the Government of India to, “take decisive action to eradicate manual scavenging and to report on nation and state-wide action taken to put an end to this practice and on the progress made in the identification, liberation and rehabilitation of scavengers.” This same year, the SKA launched an international campaign – ‘Action 2010’ demanding an end to manual scavenging by the October 2010 Commonwealth Games, in Delhi. The logo of the Commonwealth Games is ‘Humanity, Equality, Destiny’, all terms that the Indian Government fails to live up to for as long as caste discrimination, including manual scavenging, continues to be practised in the country.

DSNUK’s FOUL PLAY campaign was launched in solidarity with the SKA and makes a number of recommendations to the Indian and the UK Governments, as well as the Commonwealth Secretariat which they are expected to fulfil before hosting the 2010 games. DSN-UK supports SKA in its demands including the release of over Rs. 800 crores for the rehabilitation of Manual Scavengers. The campaign briefing can be read on the Dalit Solidarity Network UK (www.dsnuk.org) website, working in conjunction with the SKA to realize these campaign goals.

A step in the right direction, but more must be done

Reflecting on the recent developments, Director of DSN-UK, Meena Varma, stresses that, “The continued practice of manual scavenging in India is a disgrace and a daily obstacle for achieving basic human rights for those engaged in this demeaning work. The Supreme Court ruling is a step in the right direction, but much more action on the ground needs to be seen before the Commonwealth Games can rightfully be held in India under the banner of Humanity, Equality and Destiny.”

For more information on manual scavenging, please see the SKA and theDSN-UK websites.