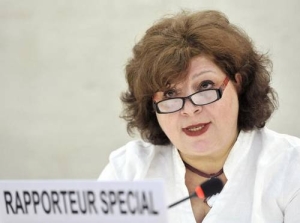 Descendants of former slaves in Madagascar suffer from deeply rooted discrimination and exploitation on the basis of their ‘slave caste’. Their low – and caste-based – status in society makes them even more vulnerable to poverty and slavery-like practices than other groups in an already very poor country.

These were among the findings made by the UN Special Rapporteur on contemporary forms of slavery, Gulnara Shahinian, during a mission to Madagascar in December 2012. Her report from the mission will be presented at the 24th session of the UN Human Rights Council next month.

The Special Rapporteur stresses that “the issue of caste discrimination should be addressed openly, not as a taboo” and recommends the country’s government and civil society as well as the international community to “work with local communities to eradicate the stigma that the descendants of slaves experience, by means of programmes, technical expertise and the funding of projects to combat caste discrimination.”

The report describes the caste systems of some of the tribes in Madagascar. These systems include slave castes, who are descendants of slaves. They face discrimination in various areas, such as unequal access to schooling and jobs, and due to their illiteracy they are more vulnerable to exploitative employment. Discrimination also exists in relation to inter-caste marriages – if a member of a slave caste marries someone from a higher caste, the couple will be stigmatised and their children will be regarded as unclean.

In a separate thematic report to the Human Rights Council, Ms Shahinian notes that caste discrimination “plays a role in increasing vulnerability to contemporary forms of slavery.” She mentions bonded labour in Asia as a practice that disproportionately affects people with disadvantaged social statuses such as a low caste.

The Special Rapporteur highlights a debt bondage system in Nepal, in which Dalit labourers known as Haliyas are paid so little for their agricultural work that they are forced to take loans from landowners. Though the Government of Nepal has ‘liberated’ this group, and pardoned their debts, reports indicate that thousands of former Haliyas continue to work for the landlords.

On a general note the Special Rapporteur recommends Governments to address the root causes of poverty, social exclusion and discrimination in order to effectively eradicate slavery, as the majority of those subjected to slavery and slavery-like practices are the poorest, most vulnerable and marginalised social groups, such as indigenous and caste-based groups.

The Special Rapporteur’s Report on her mission to Madagascar

Madagascar: “Poverty and impunity have increased contemporary forms of slavery”