Hundreds of manual scavengers demonstrated in Delhi on 7 August against government apathy in abolishing the inhuman practice of manual scavenging. Unless legislation is introduced soon, they will return in their thousands and prevent parliament from functioning. 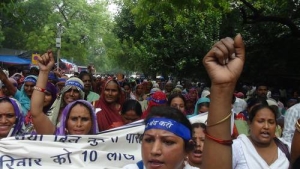 Campaigners working for the eradication of manual scavenging in India are fed up with waiting for the introduction of a new bill banning this vile and inhuman practice. On Wednesday hundreds of manual scavengers gathered in New Delhi to protest against government inaction and demand that parliament pass the long awaited bill without delay.

Should the lawmakers fail to act immediately, thousands of safai karmacharis (manual scavengers) are threatening to picket parliament on the first day of its next session and demonstrate against all MPs in their respective constituencies.

The ‘Prohibition of Employment as Manual Scavengers and their Rehabilitation Bill’ was submitted to parliament in September 2012, but is still pending. A demand to finally pass the bill is included in a memorandum to India’s Prime Minister, Dr. Manmohan Singh.

Other demands include speedier and more generous rehabilitation of manual scavengers as well as increased compensation to the families of sewage workers who have lost their lives while carrying out their hazardous occupation. The memorandum also calls for the new bill to cover manual scavengers employed to clean railway tracks.

Furthermore, the manual scavengers have asked for an apology from the Prime Minister on behalf of the nation “for all the indignities that safai karmacharis have suffered for centuries as a result of descent-based occupation and untouchability imposed by the casteist system of society”.

The rally in New Delhi was organised by the organisation Safai Karmachari Andolan (SKA), which has been spearheading the campaign against manual scavenging in India for more than 25 years. A group of former manual scavengers burned the baskets that are used for this occupation and have become a symbol of the indignities suffered by manual scavengers.

“We are fighting for our dignity. We have been suffering since centuries and have now broken our silence,”said SKA national convenor Bezwada Wilson. “It is the responsibility of the Government to take care of our problems, but so far very little has been done in this regard,” he added.

The inhuman practice of manual scavenging is a caste-based and hereditary occupation involving mainly Dalit women who make a meagre living from cleaning dry latrines with their bare hands. The definition of manual scavengers now also includes (mainly Dalit) sewage workers who work without protective gear in very dangerous conditions.

In recent years, the practice has come under increased scrutiny from international human rights bodies. In January 2013, the UN High Commissioner for Human Rights, Navi Pillay, called manual scavenging “a deeply unhealthy, unsavoury and undignified job forced upon these people because of the stigma attached to their caste.”

Pass the bill or we block the parliament (SKA press release)

Memorandum to the Prime Minister (SKA)