The President of Pakistan, Asif Ali Zardari, has said that relief work in his country should not be influenced by considerations of caste, creed or ethnicity. IDSN is urging the international community to incorporate measures against caste discrimination in disaster relief operations. 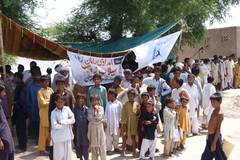 IDSN is calling on the international community to incorporate measures against caste discrimination in disaster relief operations. This photo is from Pakistan where Dalits are facing discrimination during relief efforts following the country’s disasterous floods. UN Photo/WFP/Amjad Jamal

Pakistan’s President Zardari has reacted to reports of discrimination against Dalits during relief work following the country’s devastating floods.

A spokesman for the President said on Wednesday 1 September that floods were a natural disaster and should serve to unite the people, not divide them. It will be most unfortunate and reflect poorly on the country’s image and adversely impact on national unity if relief work was influenced by considerations of caste, creed or ethnicity, he added.

President Zardari has also called for action against officials who are found to be involved in discrimination in relief and rehabilitation works. He reacted to a protest rally in Hyderabad against the maltreatment of Dalits during the relief operation.

Numerous reports have confirmed that Dalits are facing discrimination during relief efforts. They are being denied access to relief camps and suffer mistreatment and exclusion. According to the Pakistan Dalit Solidarity Network (PDSN), the number of Dalits affected by the floods may be hundreds of thousands, mostly in Sindh Province.

“Humanitarian agencies, whether multilateral, governmental or non-governmental must accept the responsibility to ensure that Dalits are not discriminated against and left out in relief and rehabilitation operations,” IDSN said in the statement.