Three Dalit veterans of the international struggle against caste discrimination were part of an IDSN delegation that met the Danish Minister for Development, Søren Pind, in Copenhagen on 8 September. 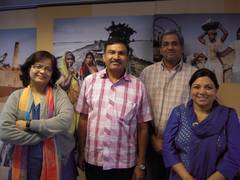 The Danish Minister for Development travelled to Nepal earlier this year. A visit to a Dalit village was included in his itinerary, and the encounter with Dalits made a big impression on him, he told an IDSN delegation during a meeting at the Ministry of Foreign Affairs.

Mr Pind also expressed his support for Dalit rights and the work of IDSN. For several years, Denmark has supported efforts to place caste discrimination firmly on the international human rights agenda.

The IDSN delegation consisted of some of the network’s board members, which include three prominent Dalit activists – Manjula Pradeep (Navsarjan, India), Vijay Parmar (NCDHR, India) and Durga Sob (FEDO, Nepal). Another member of the Executive Group, Bijo Francis (AHRC, Hong Kong), and staff from the IDSN secretariat also took part in the meeting.

The board members gathered in Copenhagen during the second week of September for an IDSN Executive Group meeting. During their stay they also had discussions with representatives of the Danish government and civil society organisations.

Finally, they participated in a reception to mark IDSN’s 10th anniversary. The event was attended by a broad range of civil society groups, members of the Danish Dalit Solidarity Network (DSN-DK) and representatives of the diplomatic community in Copenhagen.