A march – or ‘yatra’ – for the eradication of manual scavenging in India was launched on 29 September. During the next few weeks, buses will carry campaigners from five different corners of India to the capital. 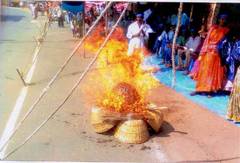 The burning of baskets has become a symbol of the struggle against manual scavenging. Photo: SKA

Five former manual scavengers have kicked off a nationwide ‘Samajik Parivartan Yatra’, which will visit 20 Indian states before culminating in a mass rally in New Delhi on 1 November. The yatra is organised by Safai Karmachari Andolan (SKA), the national movement for the eradication of manual scavenging.

During the yatra, campaigners will organise street meetings and rallies and meet with local, district and state officials. They will also burn baskets used for manual scavenging, thereby destroying the symbols of the practice.

SKA has prepared a list of demands to the authorities. These include an official apology from the Indian government, the total eradication of manual scavenging, rehabilitation packages for manual scavengers and free education for their children.

At the launch of the yatra in New Delhi on 29 September, five liberated manual scavengers shared their own experiences of pain and suffering. They explained how owners of dry latrines, users and the general public had practised ‘untouchability’ against them. Now they are determined to participate in the liberation of all remaining manual scavengers in India.

It is estimated that as many as 1.3 million manual scavengers remain in India – despite a 1993 ban on the practice. SKA was founded in 1995 and has since then grown into a national movement spread across 25 states in India. In 2007, it initiated ‘Action-2010’, a campaign to eradicate manual scavenging completely by December 2010. The national bus yatra is part of this effort.