The report just launched by IDSN member All India Dalit Mahila Adhikar Manch (AIDMAM-NCDHR) focuses on the current status of Dalit women in India, the nature and extent of crimes committed against them and the existing gaps in the system which create barriers in accessing justice. It also highlights a detailed analysis of the NCRB data on crimes committed against Dalit women from 2014-19 and the current socio-economic and political status of Dalit women in the country. 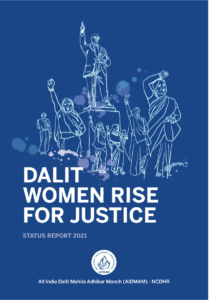 In her letter of appreciation for the report, IDSN Executive Director, Meena Varma states:

“This report is most crucial and relevant in the current times, given the delicate socio-political status of Dalit women in India and all other parts of South Asia. It gives some very valuable and insightful highlights about the current status of Dalit women in India regarding their socio-political condition and access to justice in Indian society, while the violence against them is rising exponentially. It is a holistic and comprehensive document that has effectively captured and analysed both factual and theoretical discourse about Dalit women’s issues. Also, it is a well-drafted account of AIDMAM’s hard work both on national and international levels. I would like to congratulate the entire team of AIDMAM for their success in publishing this report and sincerely hope that it will form a strong and firm base for both national and international advocacy for all the civil society organisations and allies of Dalit issues.”