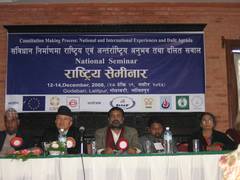 Approximately 50 members of Nepal’s Constitutional Assembly – the body charged with making a new constitution and restructuring the state – were gathered at a seminar on Dalit human rights in the constitution making process from 12 to 14 December 2008 outside Kathmandu.

At the seminar hosted by the Dalit NGO Federation (DNF) Constitutional Assembly members and their political parties were grilled by Dalit NGOs and others for paying only lip service to the Dalit human rights agenda.

President of the National Dalit Commission, Mr. Ram Lal Bishwakarma, criticised party heads for discriminating against Dalits and for not allowing the question of Dalit human rights to be raised within parties. “We cannot achieve our goals separately – let’s unite and do something for Dalit rights”, he said.

Chair of the Constitutional Assembly and Chief Guest, Mr. Shubash Chondra, said the Dalit issue is a national issue for all parties to take up. “Without the inclusion of marginalised communities such as Madhesi and Dalits in the constitution making process Nepal will face a lost opportunity.”

DNF presented a Dalit agenda paper with recommendations on how to secure Dalit human rights in the coming constitution. Speakers from India, Europe and the US told Constitutional Assembly members that the issue of caste discrimination in Nepal and elsewhere is an issue of serious international concern.

Draft programme of DNF seminar for CA members (in English)