Approximately 1,000 non-Dalits launched a coordinated attack on three Dalit settlements in Dharmapuri District, Tamil Nadu, on 7 November. Hundreds of houses were burnt and looted – ostensibly because of an inter-caste marriage. 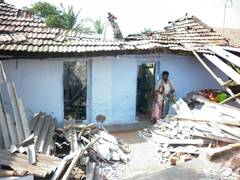 The attacks on Dalit villages in Tamil Nadu resulted in the destruction of many homes. Photo: Henri Tiphagne

They came in the afternoon in vast numbers, looting Dalit homes and torching them with petrol bombs. As night fell, and the violence subsided, hundreds of dwellings had been damaged or even destroyed and 1,500 Dalits left without shelter and deprived of their belongings.

The attack by a mob of Vanniyars – a so-called ’backward’ caste whose members consider themselves superior to Dalits – followed the suicide of a member of their community whose daughter had married a young Dalit man. The father had been so upset by the marriage that he killed himself. After his death, angry Vannyars went on a rampage.

Prior to the riots, the young couple had sought protection from the authorities, and reportedly, 300 police personnel were guarding the village of Natham where the couple lived. They were, however, unable or unwilling to prevent the mob from attacking Natham and two other Dalit settlements. The inhabitants saved themselves from bodily harm by fleeing to another village.

Since the incident, more than 90 suspected rioters have been arrested, and the affected Dalit families have been paid compensation and offered temporary shelter.

Henri Tiphagne, executive director of the human rights organisation People’s Watch, an IDSN associate, travelled to the area in the wake of the attack to assess the situation and provide assistance to traumatised children.

“It was the most shocking of caste atrocity incidents that I have seen in my life so far in terms of the effect of the incident – one inter-caste marriage that has been performed with police knowledge and protection resulting in violence with 430 houses attacked,” he said.

The Chairman of the National Commission for Scheduled Castes, P.L. Punia, visited the area on Monday. He told reporters that the riot was a “well-organised and planned attack” and not only caused by anguish over a single incident – a reference to the suicide that ostensibly triggered the mob violence.

Selected press and other reports (further links added on 26 November):

A wedding and a funeral

Dalits: Attacks were meant to destroy our resurgence

Attacks on Dalits was planned

Estimate of damage in Dalit villages not accurate

Henri Tiphagne’s blog on the incident