Thousands of Dalits and Adivasis gathered in Delhi on Friday to demand amendments to the SC/ST Prevention of Atrocities Act. The government may bring in these amendments early next year. 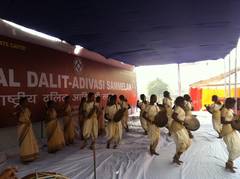 Three years of campaigning by a national coalition of Dalit and Adivasi rights groups appeared to have been rewarded last Friday as an Indian government minister promised to amend the law that is meant to protect Scheduled Castes and Scheduled Tribes (Dalits and Adivasis) from atrocities and discrimination.

Speaking at the National Dalit-Adivasi Sammelan in Delhi, the Minister for Social Justice and Empowerment, Kumari Selja, called the conviction rate in atrocity cases ‘shameful’ and said that the PoA Act needed urgent amendments to plug loopholes in its implementation. The draft of the amendments are in the final stages of consultation and may be brought in early next year.

The mass rally brought together hundreds of civil society groups that have campaigned to amend and secure implementation of the PoA Act. Human rights activists, atrocity survivors and politicians from a number of parties spoke at the event which has been described as one of the most powerful expressions of Dalit assertion in recent years.

Vijay Parmar, national convenor of National Campaign for Dalit Human Rights (NCDHR) accused government officials, including the police, of impeding the implementation of the PoA Act due to their social prejucides: “Evidence clearly reveals the brazen extent of injustice meted out to the Dalits and Adivasis, and the impunity enjoyed by the violators at the hands of enforcement machineries,” he said.

The Sammelan issued the “Dalit-Adivasi Delhi Declaration 2012” as a wake-up call to the people of India and their elected representatives. The declaration calls on the “entire nation” to free India from “the oppressive forces of caste and patriarchy”.

On the eve of the event, more than 30 member organisations of the human rights coalition FORUM-ASIA sent a solidarity message to the Sammelan, supporting its demands and expressing “their utmost concern over the poor implementation” of the PoA Act.

The International Dalit Solidarity Network has also issued a message of solidarity for the Dalit-Adivasi struggle, expressing its full support for the Delhi Declaration and the call to the Indian Nation to stop ’untouchability and discrimination’.

“IDSN supports the calls upon the Government of India, the country’s Parliament, and political parties, to uphold, implement and enforce legislation and constitutional provisions that protect Dalits and Adivasis from atrocities and discrimination, as stated in the Delhi Declaration. We congratulate all the civil society groups in India that have fought so hard to free Dalits and Adivasis from discrimination and oppression,” the organisation said.

Following the rally, Prasad Srivella, convenor of the National Coalition of civil society groups that works to strengthen the PoA Act, called the Sammelan a historic event, but also noted that “our joint journey is not over yet… Our collective political task has just started. It must take a clear and decisive shape in the next few months.”

National government to bring amendments in to atrocities act (The Hindu)