A national march – the Maila Mukti Yatra – will cross India with a call for the total eradication of ‘the slavery of manual scavenging’. It happens at a time when prominent campaigners have expressed scepticism towards new legislation against this banned, but continuing, practice. 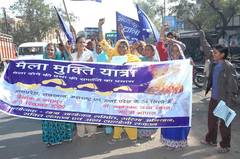 Tomorrow, hundreds of activists will gather in Bhopal to embark on a journey that will take them through 120 districts in 18 Indian states. When their march against the inhuman and illegal practice of manual scavenging is over in late January, they will have been joined by many more and may well have reached tens of thousands of scavengers across the country.

The march – the Maila Mukti Yatra – is the second of its kind in the past three years. It is organised by Rashtriya Garima Abhiyan – Jan Sahas, a national movement for the elimination of manual scavenging. This practice is unlawful, but continues to exist all over India and is almost exclusively carried out by Dalit women.

According to one of the main organisers, Ashif Shaikh, the Yatra is a “landmark step by 11,000 liberated manual scavenger women marching 10,000 km across the country for the total eradication of this practice and new legislation for the comprehensive rehabilitation of manual scavengers.”

One of the many former manual scavengers participating in the march is Kala bai Lavre. Last week, she told The Hindu newspaper that “when people say it has been 60 years of India’s liberation, I find it difficult to believe, for we are still slaves, working for others, picking up human excreta with our bare hands.”

The first Maila Mukti Yatra in 2009 managed to liberate about 500 manual scavengers. It ended in Bhopal where the new and much bigger march will commence tomorrow. The Yatra will reach Delhi on 31 January next year and happens at a time when new legislation against the practice is about to be introduced.

While this step by the government has been cautiously welcomed by activists, Ashif Shaikh has also noted that there are insufficiencies in the proposed bill. A leading campaigner against manual scavenging, Bezwada Wilson of the Safai Karmachari Andolan movement, recently expressed scepticism in an opinion piece in The Hindu.

He deemed it ‘not likely’ that the new bill would make a difference and accused central and state governments of being ‘in denial’ of the issue. Bezwada Wilson also called the bill ‘terribly gender insensitive’ as its language assumes that manual scavengers and public authorities are men.

“In a context where the majority of manual scavengers are women, this is absurd. The rehabilitation schemes must respond to the needs, problems and issues of women in the Safai Karmachari  community,” he wrote.

National march for eradication of manual scavenging (The Hindu)

Sh*t, caste and the holy dip (opinion piece in The Hindu)